The characteristic gorge of Hengifoss attracts tourists from all over the world. With its colourful horizontal stripes it is created by the Hengifossá, with its slim waterfall that is perceived almost as a void, an open slit in the landscape. The service facilities, as a response, grows out of the same landscape and creates a a new gorge, a sheltered space which opens towards the west and the sun. Skálin and skálinn, the two gorges, creates a symbiosis that blend start and end of the journey in the vast Icelandic landscape. 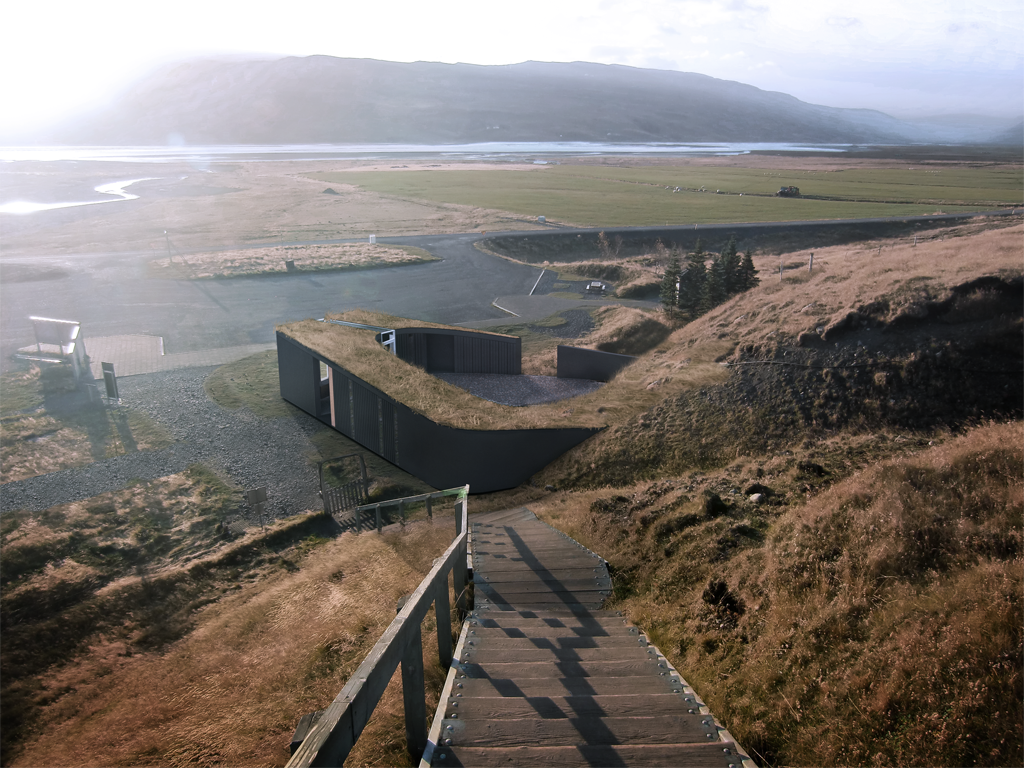 The project was awarded 1.prize in the open national competition organized by the local municipality Fljótsdalshreppur, in association with Arkitektafélag Íslands. The exterior 3D visualizations was made by Vizstudio Espen Tomren. 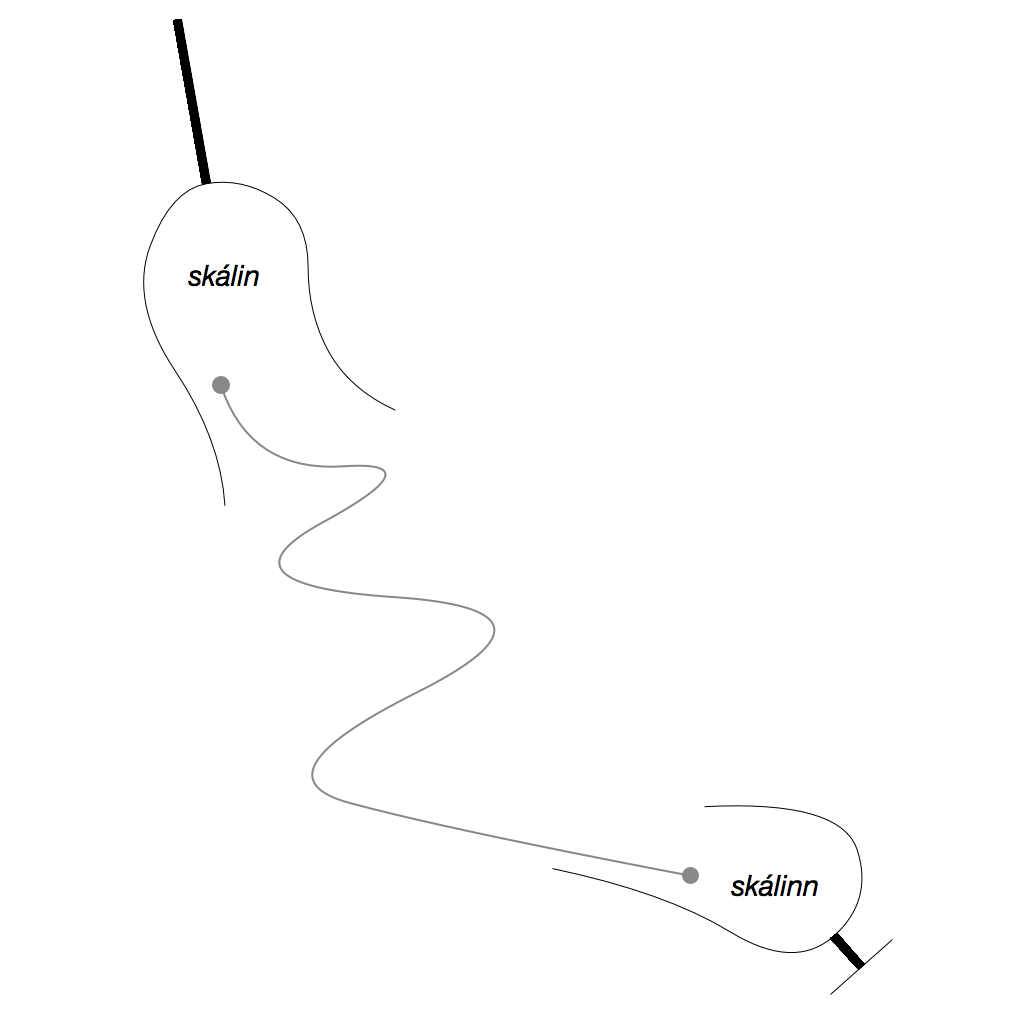 The entrance of the exhibition / sales facilities are placed in a constructed void, a light slit that divides the building and echoes the waterfall at the end of the hike. The steep ascent at the start of the hike offers good views of the Fljótsdal and the roof landscape, the green fields extending onto the roof, making the building blend with its surroundings. 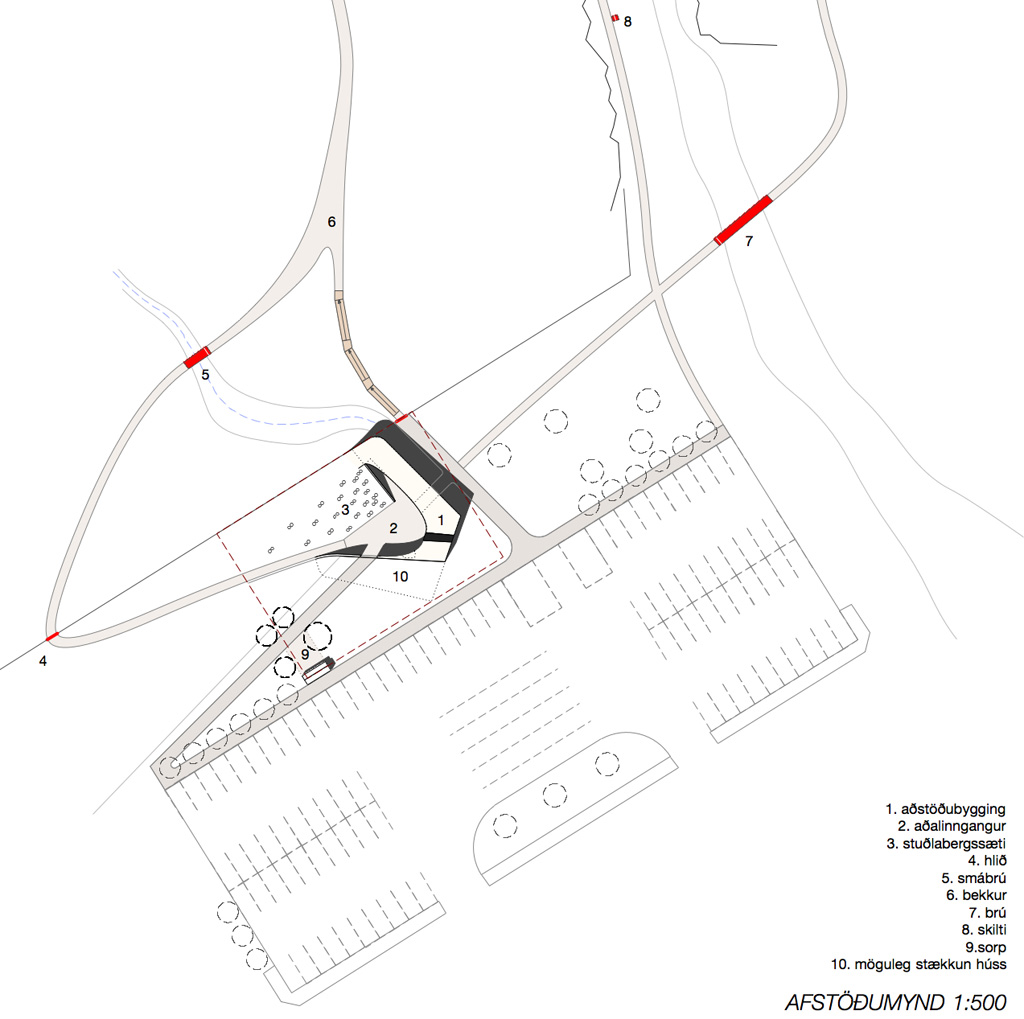 In stead of making an ascent on the steepest part of the hillside, on the eastern side (as suggested in the local plan), the ascent departs towards the west and defines a more natural startingpoint / endpoint for the hike, from the sheltered yard of the service facilites. This deliberate line of movement also activates the southwestern hillside, as a complementary resting place on sunny days.

In stead of placing the new pedestrian bridge to the eastern side of the Hengifossá down by the main road (also suggested in the local plan), it is placed at the start of the ravine and designed as part of the landscape esthetics. The unnecessary «detour» for the hikers down to the main road is thus avoided, and the bridge span is reduced considerably, since the Hengifossá is narrower at this point.

The overall scheme is not dependent on these suggested changes from the local plan, but the concept is greatly strengthened by them and the overall experience is enhanced if they are executed.

The layout is simple and logical – every activity is well connected and equally opens towards the yard. It turns its back towards the parking, and opens up towards the movement through the landscape. The exhibition / sales facilities are separated from the toilets, making the toilets and exhibition areas independently accessible. The characteristic slit through the sales area creates a bright space and at the same time sufficient wall space for the exhibition and sales stands. The skylight also have an inverted effect, and serve as a beacon of light leading the way for hikers on their way back to the lower valley at dusk and dawn.

The choice of materials for the service facilities building also draws its inspiration from the surrounding landscape, both from the Hengifoss and the Litlanesfoss. Dark concrete (in-situ or prefabricated elements) with dark aggregate plays with the colours of the adjacent terrain, and the surface structure abstractly enlivens the facades. As a colorful contrast, resembling the red horisontal lines of the Hengifoss lava layering, red anodized aluminium is used for signage and other secondary elements in the interior. 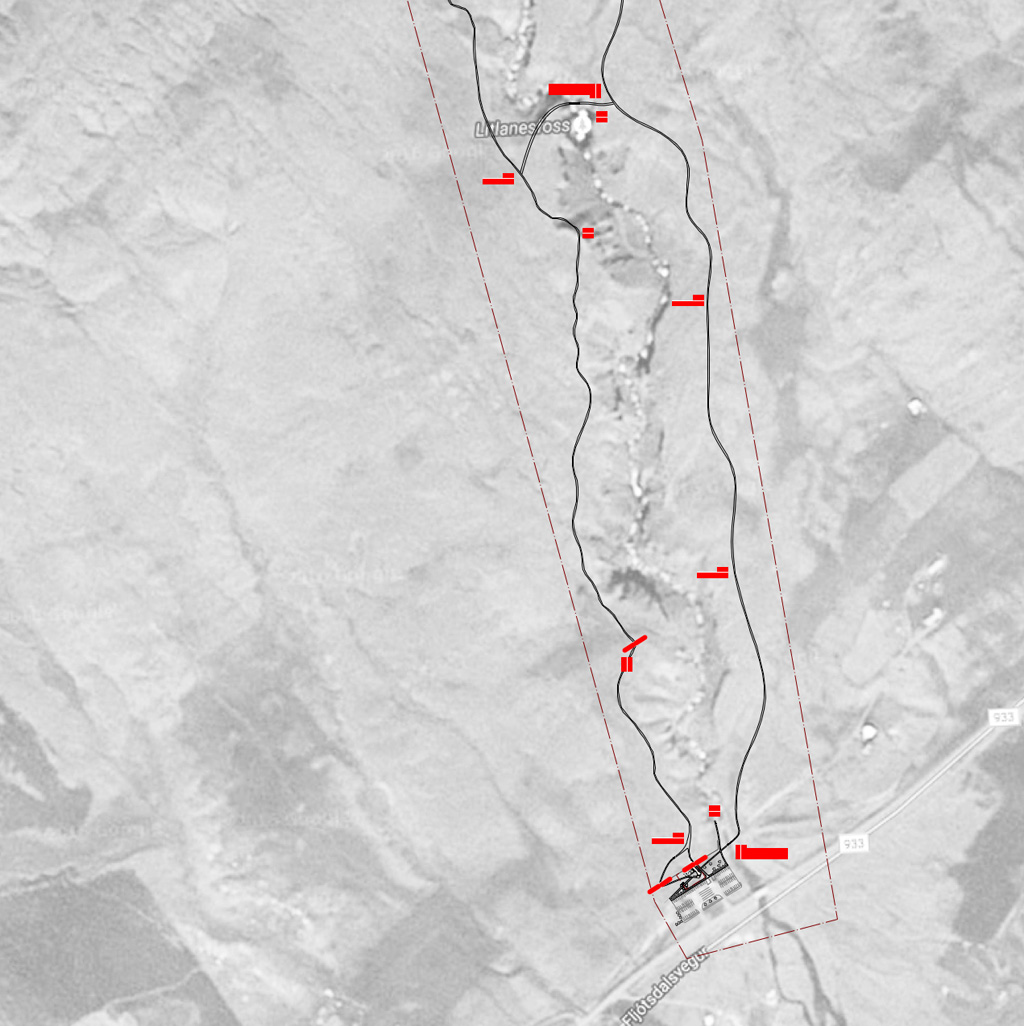 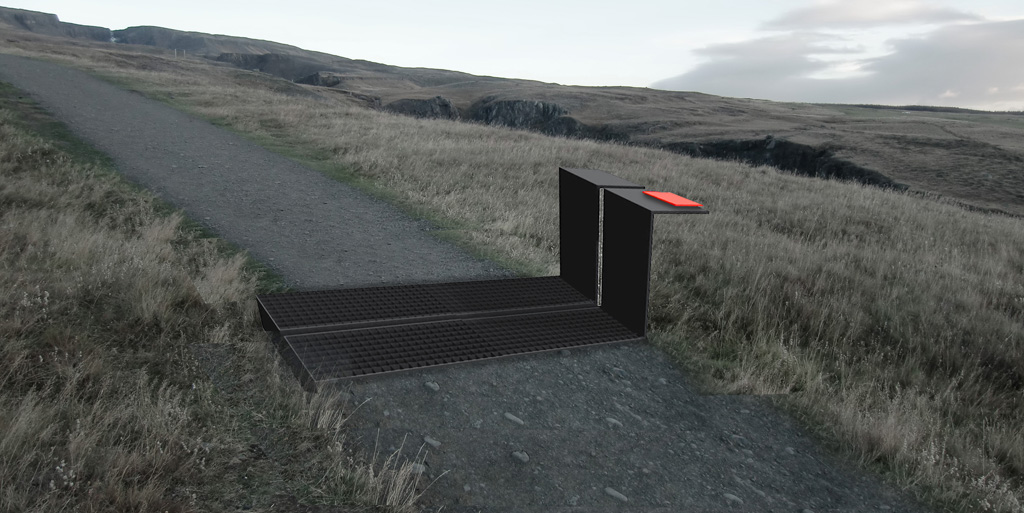 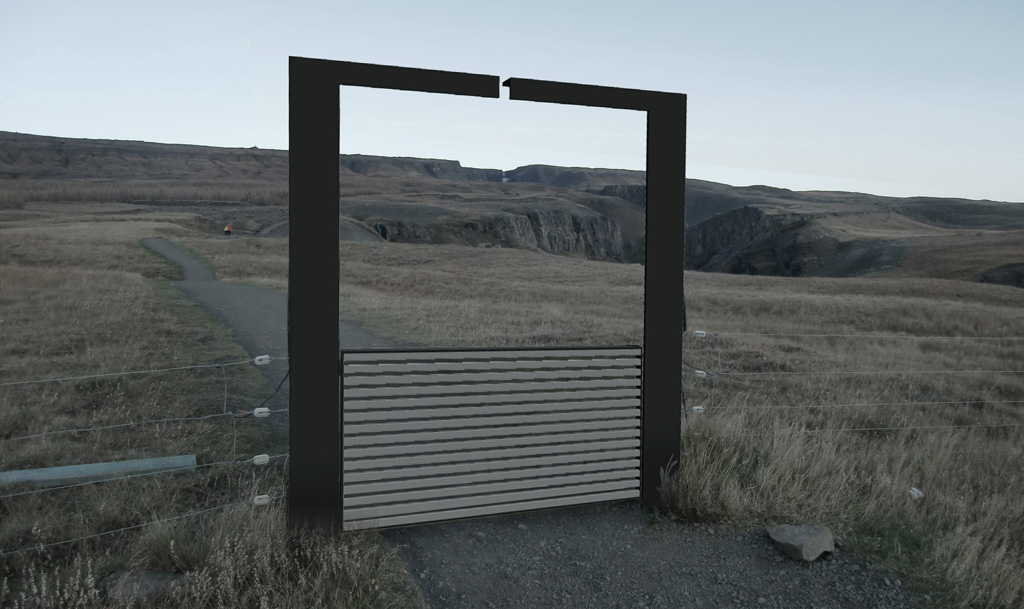 The landscape elements have concrete foundations with the same colour / aggregate as the service facilites. The folded surfaces are made from lacquered carbon steel as a strong base structure. On the steel, signage in red anodized aluminium and sitting surfaces in naturally weathered larch are mounted, adapted to the entended use. The colours blend in with the landscape, except for the anodized aluminium plates which acts as subtle visible markers. 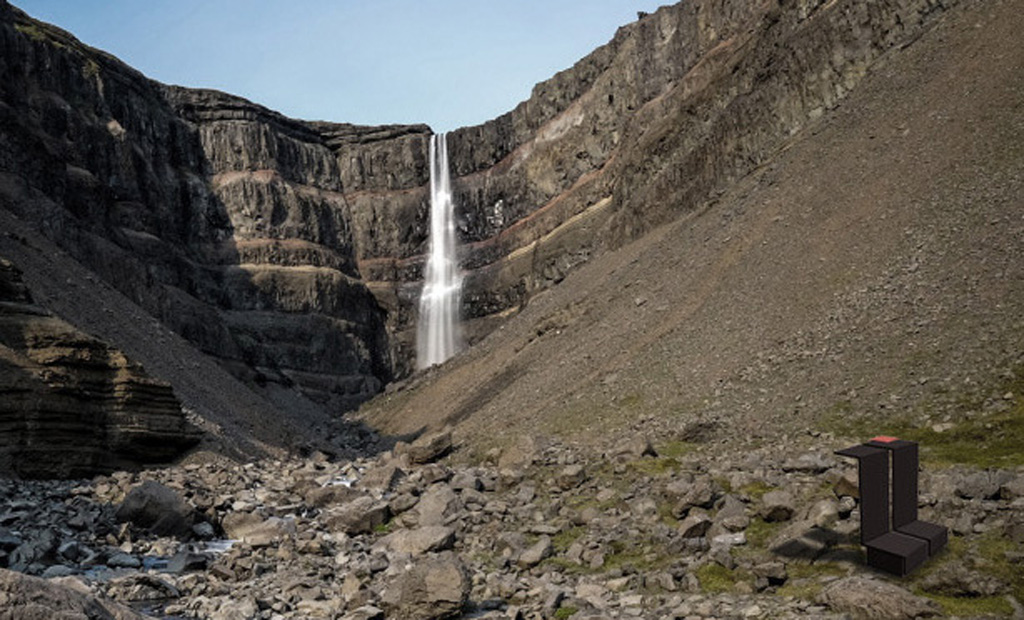