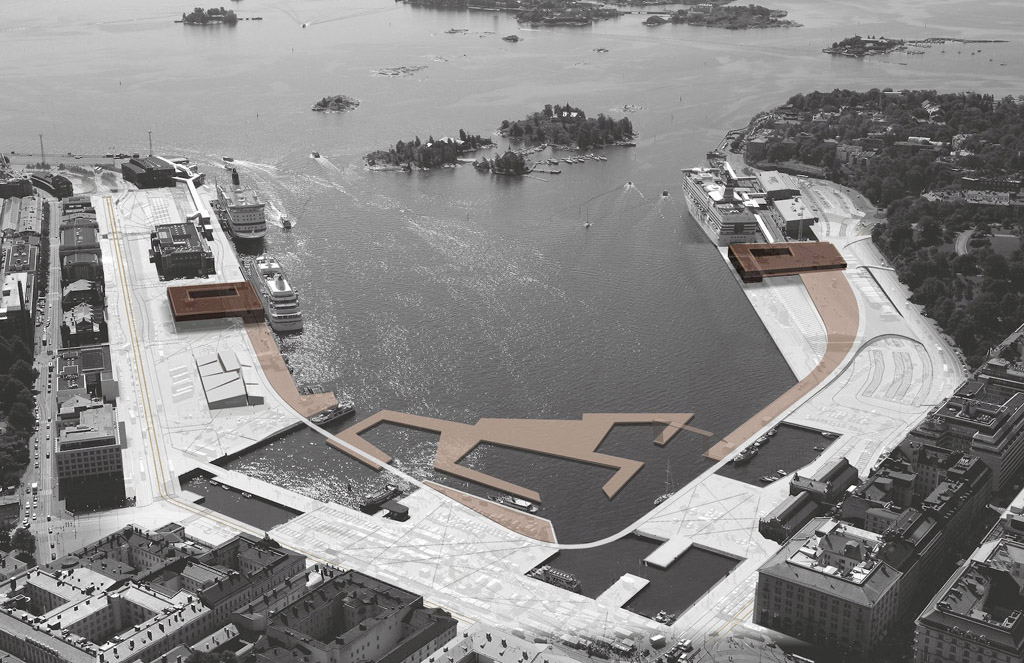 When walking through the South Harbour area, the instinct reaction is that the area is quite well functioning. The port activities with its passengers, vehicles and cargo is strangely intertwined with softer public use and serves as a basis for the lively, rough feel of the area. In other words, the percieved problems with shore access, traffic and parking are necessary «evils» that support and enliven the inner harbour activities. So how to go about changing the area without removing its character and the basis for it? 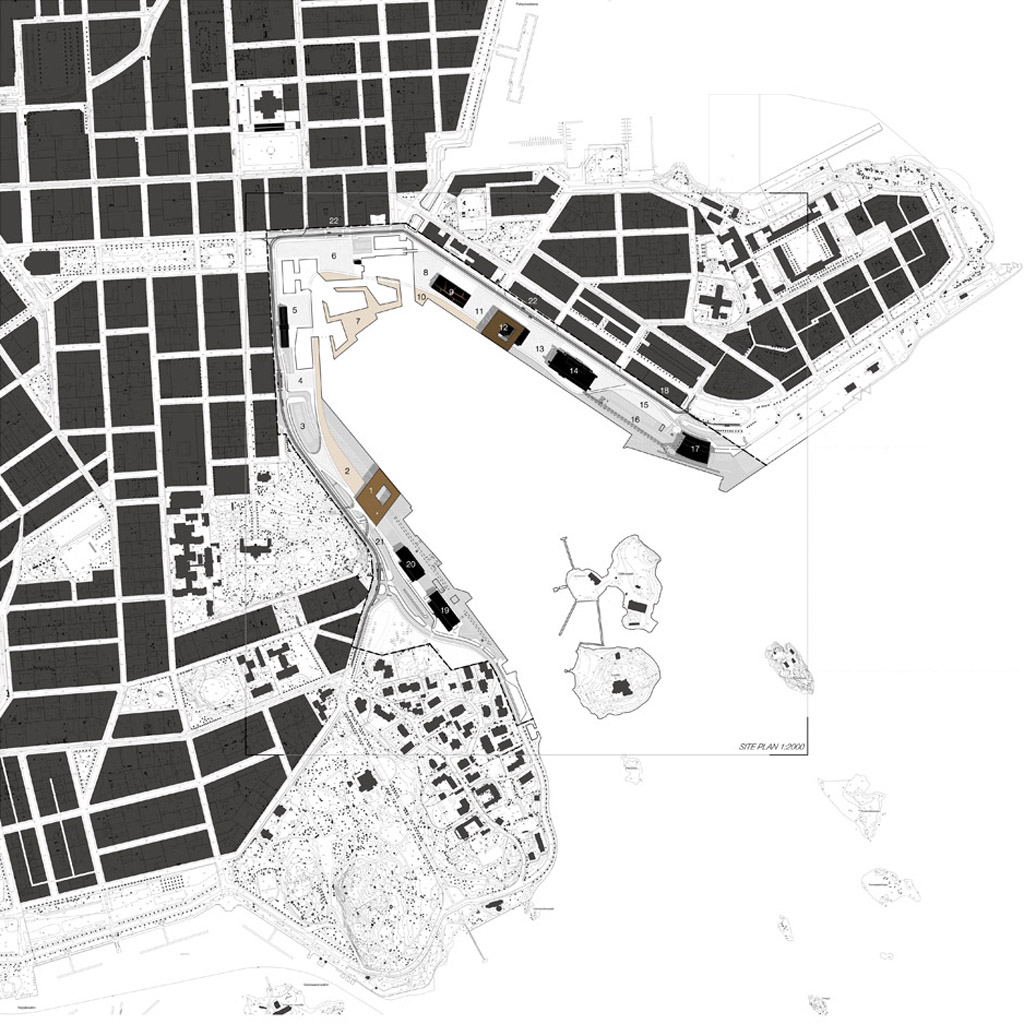 The approach to the area is lightweight: subtle changes to the traffic flows and new elements to the areas add an extra layer to the already existing fabric, supporting a softer and more humane environment. Wood is chosen as a signature material for several reasons; it is a good carbon storage medium, and it will support the homeland industries through innovation. It also brings a warm contrast to the larger asphalted existing surfaces. Each of the suggested projects can be sustainably optimized, consolidated through further detail planning and certification of the building process. The lightweight strategy per sé is sustainable in a longterm perspective by reducing consumption. 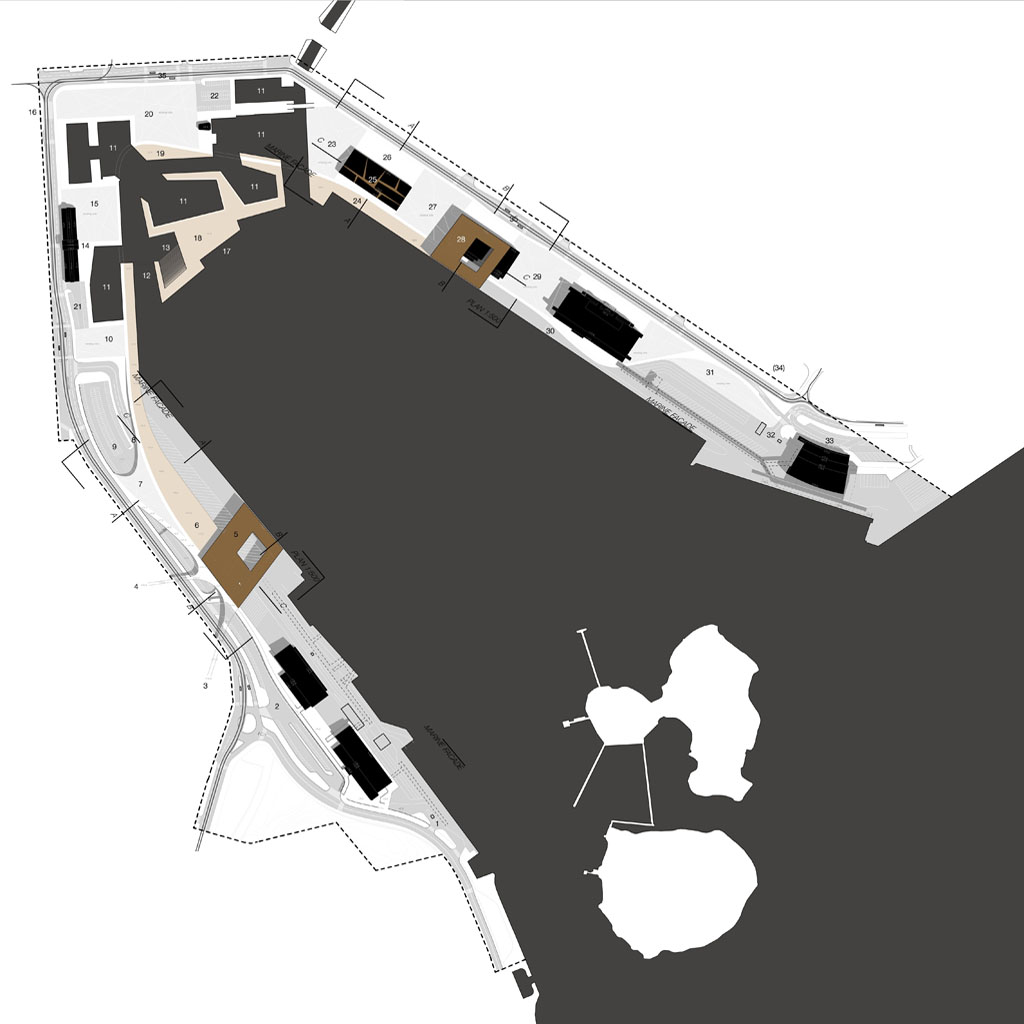 By introducing stacked parking in the vicinity of the terminals, most of the parking lots in the inner harbour can attract new activities. Also introducing a new soft pedestrian route along the entire inner harbour shoreline the open spaces can be used for instance as free-market space, festivals grounds etc, or be activated by their adjacent buildings. To support even further public use in the inner harbour a new lightweight wooden activity field gives direct access to the water through a small «beach» (for toedipping) and includes an elevated pedestrian footbridge, a diving tower / viewing platform, and leisureboat basins. The soft network is supported by a new tram line that runs through the Esplanadi park from Katajanokka K8 terminal, stopping at the Katajanokka K6 (new day-visit cruise terminal and art museum) and at the Kauppatori market. This unites in an environmentally friendly way the whole of the South Harbour area. The main traffic flows of vehicles and cargo is shifted, from being all through the inner harbour area to a two-way periferal system. The Olympia / Makasiini traffic is redirected to the south west and connected to the western harbour areas of Helsinki. The Katajanokka cargo terminal is likewise redesigned and the traffic is redirected through gate C. This leaves much more of the north-eastern shoreline open to the public. 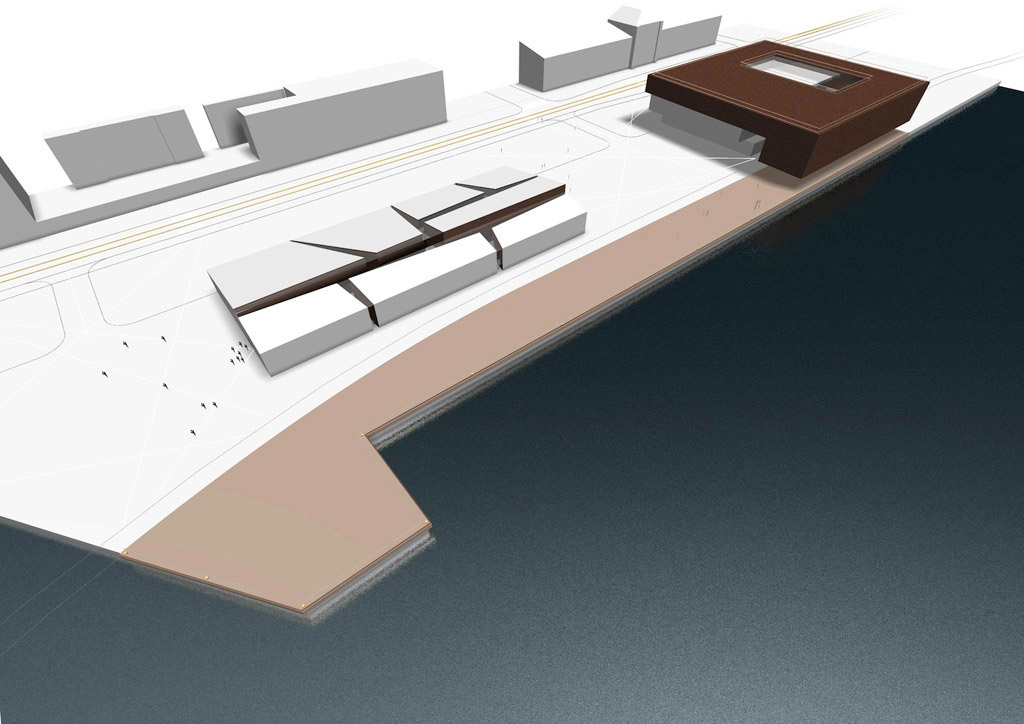 The existing buildings on Katajanokka have a distinct character, and the approach to the area introduces both transformations and additions. The existing asphalted areas have been kept and surface elements (such as landscaping elements in the park) are additions on top of the existing surface. The street section has been redesigned to facilitate more immediate drop-off / temporary parking on the cityside, the new tramway in the middle and an extended green park on the waterside. The surface parking is relocated to the Katajanokka K8, in close walking distance. The shared spaces between the harbour buildings provide new entrances to the buildings, drop-off and temporary parking. Because of the low traffic intensity, there are no problems mixing the different user groups with vehicular traffic through surface design solutions and signage. Along the waters edge is a new wooden esplanade, slightly elevated (+2.5), which takes the visitors from the day-visit cruise terminal and museum, through the new waterside activity field past the Kauppatori to the new Makasiini terminal.

Instead of demolishing the Kanava terminal building it is transformed through low cost incisions, making room for a flee market with many small vendors. The K6 harbour building is the Katajanokka portal building and the boundary towards the traditional harbour areas. It is designed by added built mass, which architectonically plays together with the new Makasiini terminal on the western side of the harbour. It mixes the art museum and the day cruise terminal with an outdoor covered sculpture garden in its center.

A new hybrid building containing the new Makasiini terminal solves many of the conflicts in the area. By improving the access and proximity to the waters edge for the public, and making a new movement pattern for pedestrians and bikers along the shoreline (avoiding conflict with vehicles), the new terminal and its «hillside» esplanade redefines the way people move through the area. The new terminal building also makes room for 500+ new  in house parkingspaces. The extended drop-off zone of Olympia and Satamatalo concentrates the arrival and departure traffic to the terminals at one location. There are many benefits from demolishing the existing terminal: By stacking the flows and user groups vertically, the cargo handling zone comes closer to the water with direct access to the ships. The public wooden «hillside» esplanade with overview over the harbour area offers a number of new activities to the public. The new terminal roof contains an urban park and belvedere over the whole harbour area. The park landscape of the Tähtitornin Park extends out towards the port area and becomes the visual link between the city and the harbour.

The new Makasiini terminal building provides both passenger terminal facilities and the link to the access structures to the Ferries of the Olympia terminal. The warm wooden surfaces serve as the identity that binds the new terminal end esplanade together with the inner harbour activity field and the new transformations at Katajanokka.