» The greatest secret about history is that it can change. History doesn’t just go backwards, it goes forwards too. All things that’s going to happen is just history waiting to be written. It’s how we write it that’s going to make a difference. To change history requires reconciliation with the past and the will to make innovation that rethink future. To reconcile with the island’s past history means it has to be highlighted and not ignored.« 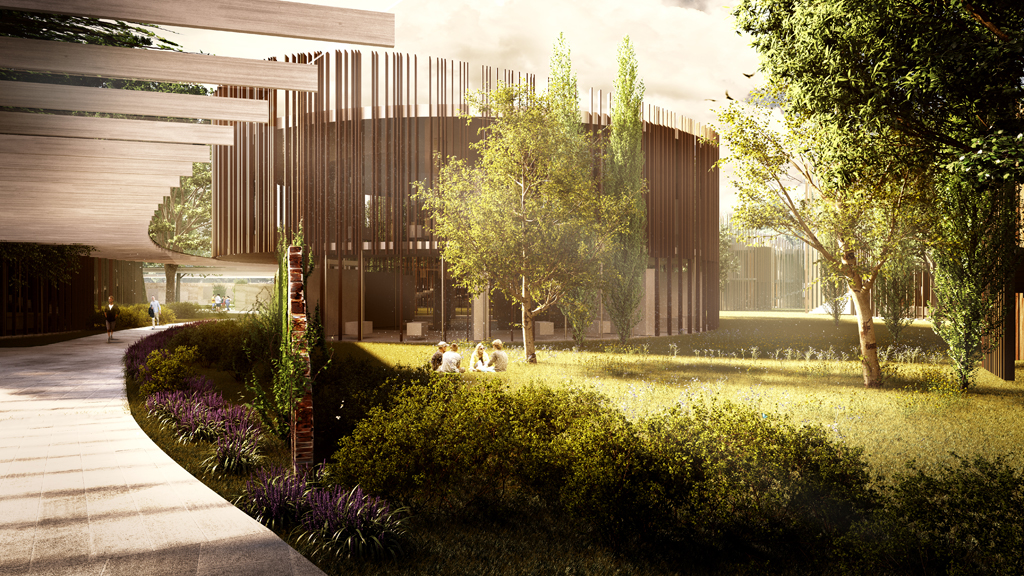 The competition proposal was done as a collaborative work of the Architects Collective EX3 at Hydrogenfabrikken, Fredrikstad, which consists of ZIS AS / ZeroImpactStrategies, Handegård Arkitektur AS and VizStudio Espen Tomren (3D visualizations). We are happy to announce that we were chosen as 1 of 30 finalists in the competition. For more info on the competition, go to the YAC website.

We keep the existing buildings as memorials of Poveglias history. They will be architectural reminiscences and contribute to demystification along with several other necessary measures; One should open up and tell the stories. Offer excursions and guided tours to the island. Tell the stories, both the ancient and the coming. One should also arrange an annual ceremony to honor and respect the victims of ancient Poveglia. It is only in such a way we gradually will be able to reconcile with Poveglias past. 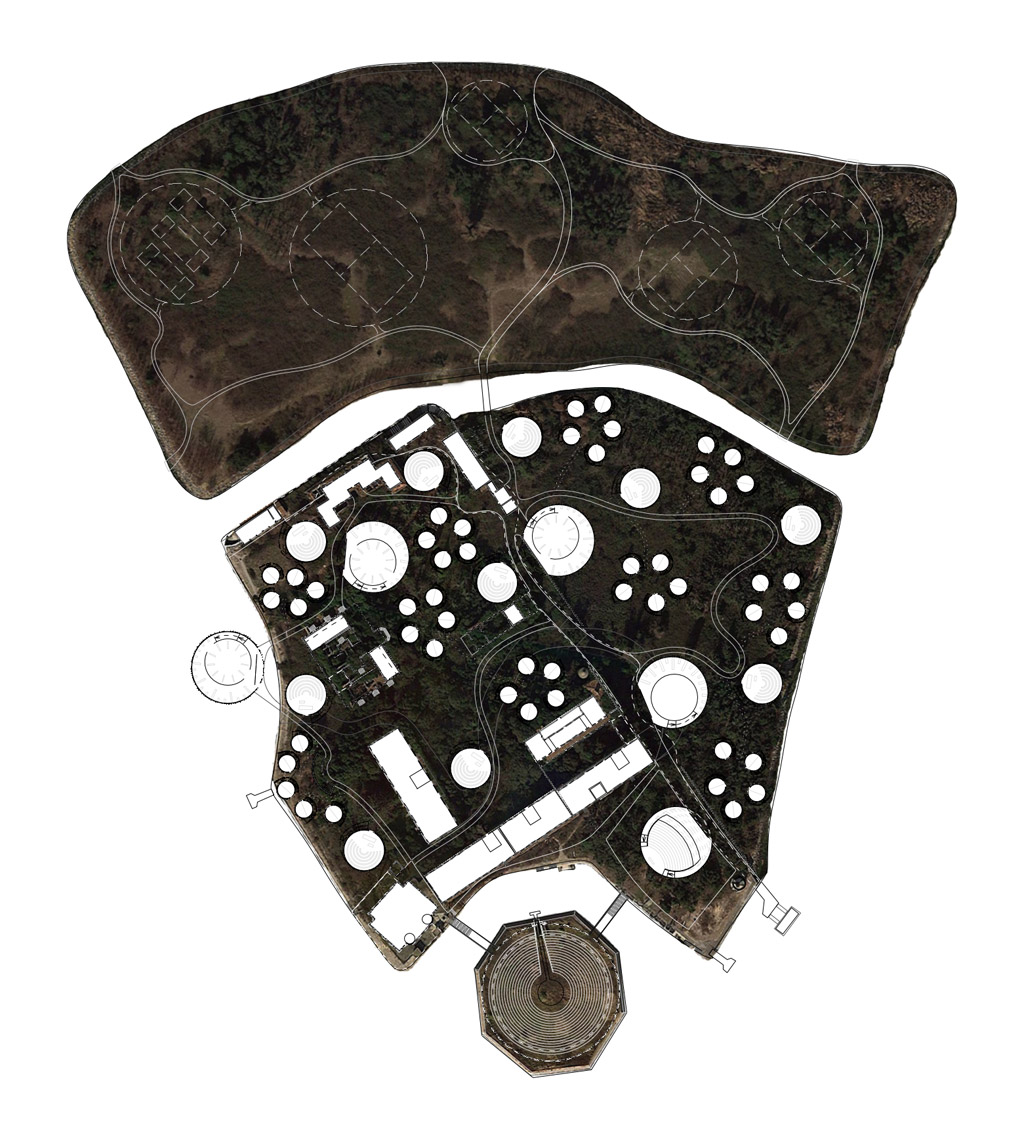 In our western world, architecture has gotten it’s independent position as a contrast to nature. In other parts of the world, architecture and nature is considered as a whole. Where nature is treated as a natural substance and architecture will abide by this, and not vice versa. They found a new equilibrium where humans lived in close contact with nature. This was an ideal, and out of this arose the idea of placing buildings that were subordinate to the natural surroundings.

In Poveglia nature has recaptured the island and the architecture. We have the opportunity to use this as a unique situation to write a new story about Poveglia. We can respect nature. Adapt to it. Ask the island where we are allowed to build – and do it on its own terms. In Poveglia we can achieve a natural development between nature, architecture and people that we have few other places in the western world – a unique charachteristic place. A way of rethinking the future that can change history.

To reduce the buildings’ size and adapt to site, the primary functions are divided into independent volumes, scattered around the island, where Poveglia allows us to build. To reach the different pavillions you must go outside into the nature and walk. From a classroom to the café or from a studio appartment to the library you will always have to move outdoors in nature.

The feeling walking through new Poveglia is like being in a fairytale – where nature and architecture is combined and the mystic past still present just behind the ruins or beneath the surface. 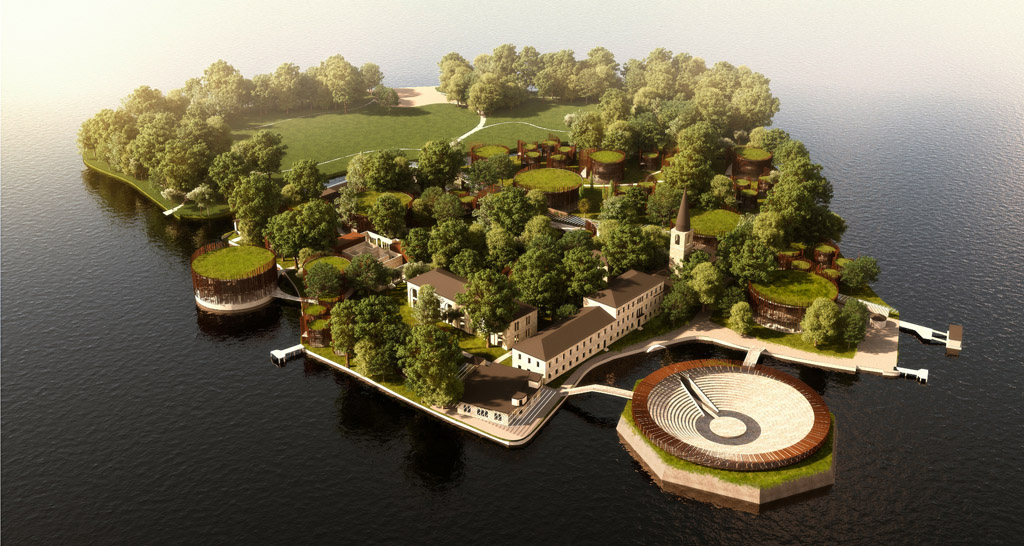 A new pier is added in the south, where the existing pier is located, for better connection to the island for tourists and students with the ACTV transport service.

When you arrive at Poveglia, you will meet a pergola roof that floats alongside and through the existing walls, and runs through the whole campus from south to north. From this line of movement there are connection points to all walkways between buildings. The roof connects the most important facilities – the auditorium, the administration, the canteen, a café.

It also connects to the sports facilities with covered outdoor training facilites towards the canal, between the landing stage / boat house and the ruins reused for changing rooms.

On the northern island there are located various leisure and recreational facilities like tennis, petanque courts, fencing, archery, high jump etc. In these parts of the island nature is trimmed, so it becomes more open. The main path leads out to a new beach with volleyball pitch at the nothernmost shore.

The existing buildings are used for offices, including the ruins beside the bell tower, which are also rehabilitated for this purpose. The other ruins are kept as architectural reminisences. They are used as temporary pavillions for exhibitions.

All new spaces like the library / reading / multipurpose facilities, classrooms and appartments are being built as circular units, customized to the surroundings. They have a skin of slats that serve different kind of needs: varying transparency; visibility, views, shading etc.

The whole campus is a mixed use campus, where classrooms, service facilites, recreational facilities and housing create a unique and completely new character for the university.

The dispersion of buildings as smaller individual entities are also the only viable way of creating a larger development without coming into conflict with the scale of the existing buildings and ruins. The unique nature / architecture blend could also only be created through the downplayed approach of the proposal.

To facilitate events for everyone on the Island, an indoors venue would blow the scale of the existing structures of the island. Therefore we have suggested an outdoor amphi to be used for the largest events – graduation, start of semester, etc. A stretched roof of sails can temporarily cover the amphi, if needed, bridging the pergola roof that encircle the amphi edge. The graduates enter by boat onto the stage in a tidal water basin, while the spectators enter from above by the new bridges linking the octogon and the main island. 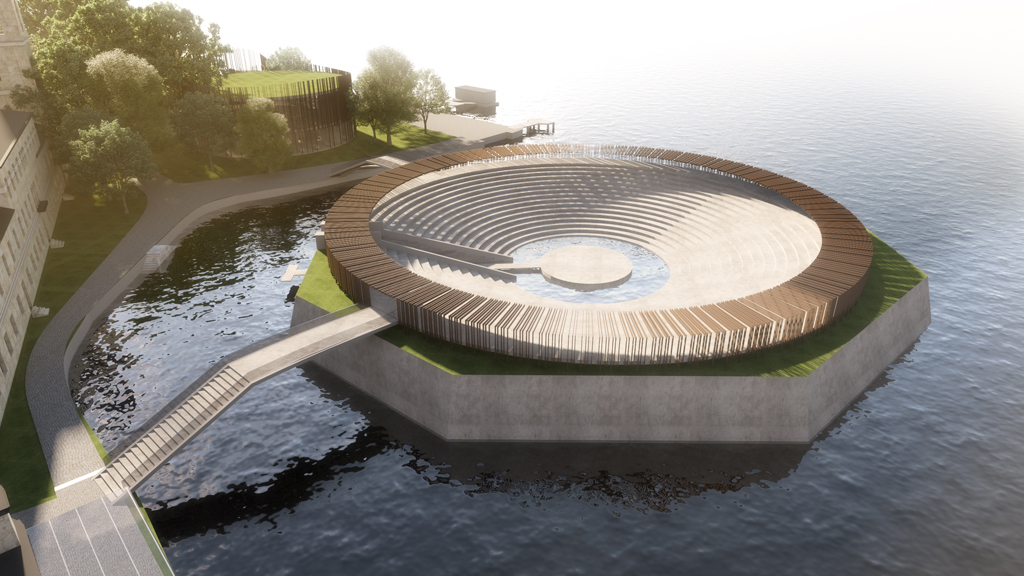 The existing buildings are just slightly altered, introducing new elements to the old constructions as contrasting elements. The exisiting / former stairwells are reintroduced, and a new partitioning of the spaces are suggested in harmony with the existing. 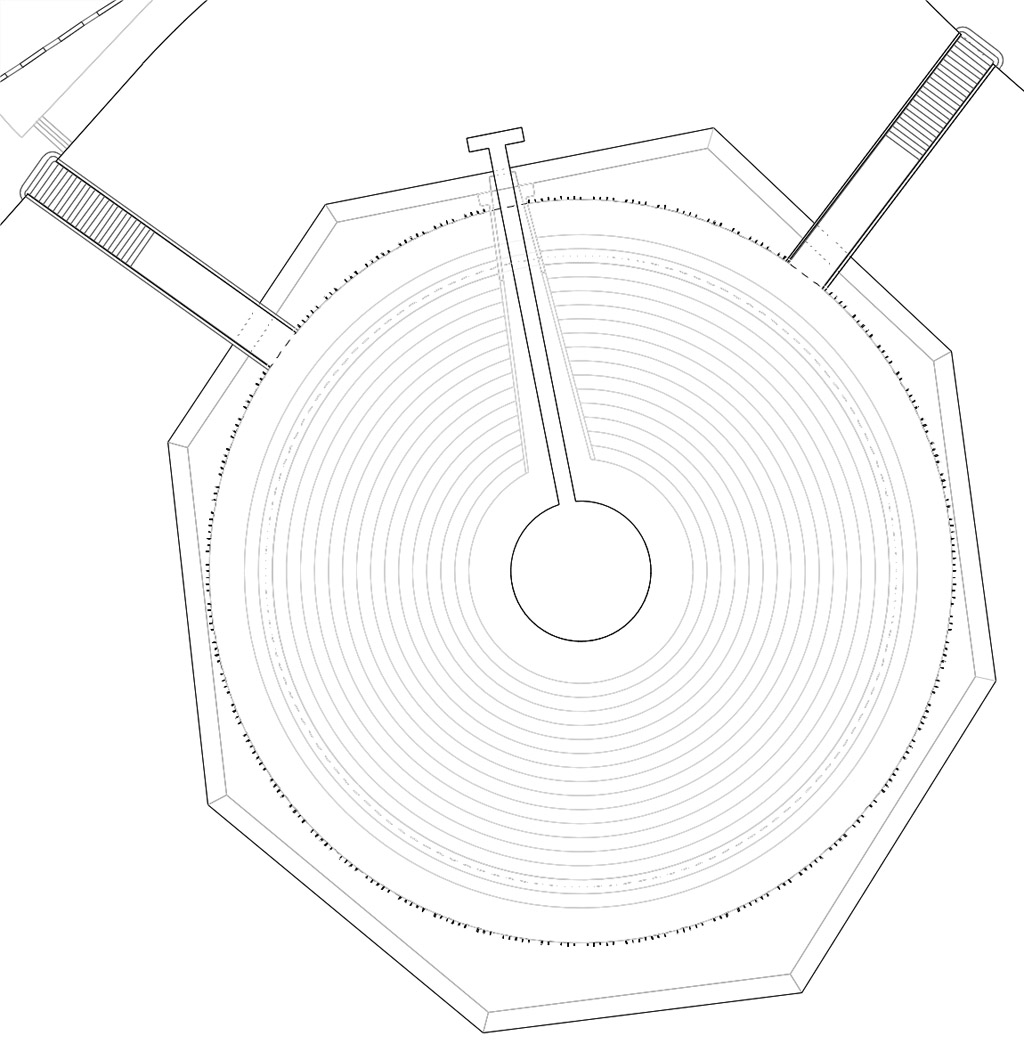 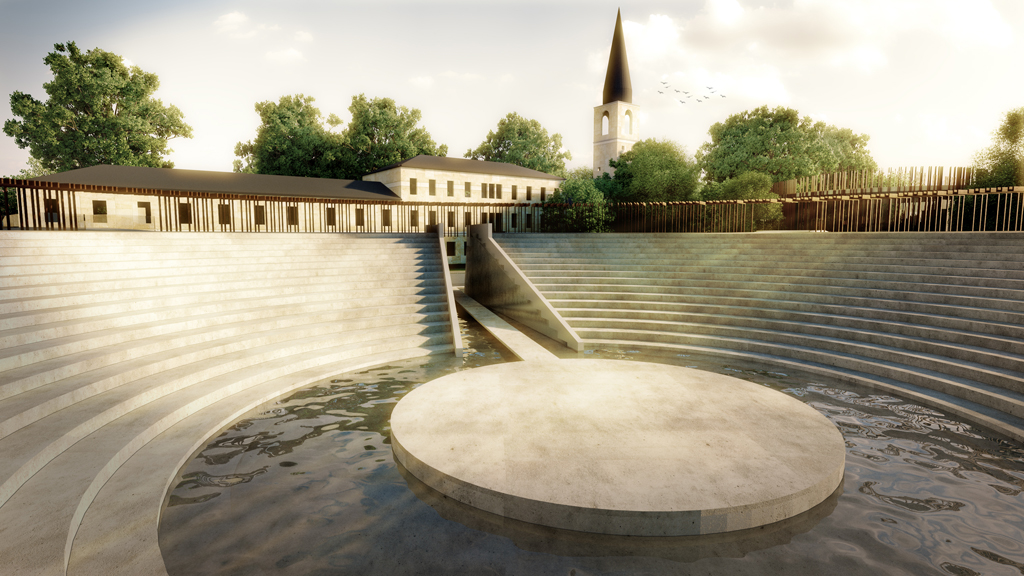 The existing ruins are internally rehabilitated and used as outdoor and semicovered exhibition spaces. Inserted inbetween the walls are new multipurpose spaces that serve the outdoor spaces and widens the flexibility of the structures. The ruins towards the canal to the north on the main island are reused for sports facilities and a café / restaurant. The church and smaller unregistered reminiscent buildings are also reactivated for exhibition use. 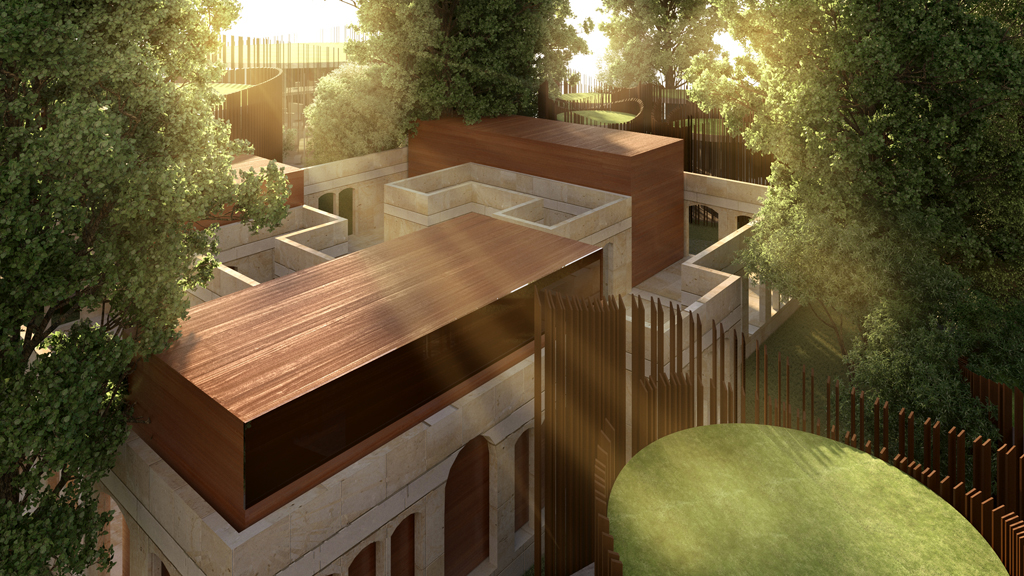 The library, reading spaces and multipurpose spaces are combined into several smaller entities, instead of one larger facility, to keep the scale down. The positive effect is that the intimacy is kept in each building, at the same time as they can be found on several locations on the island, randomly dispersed. 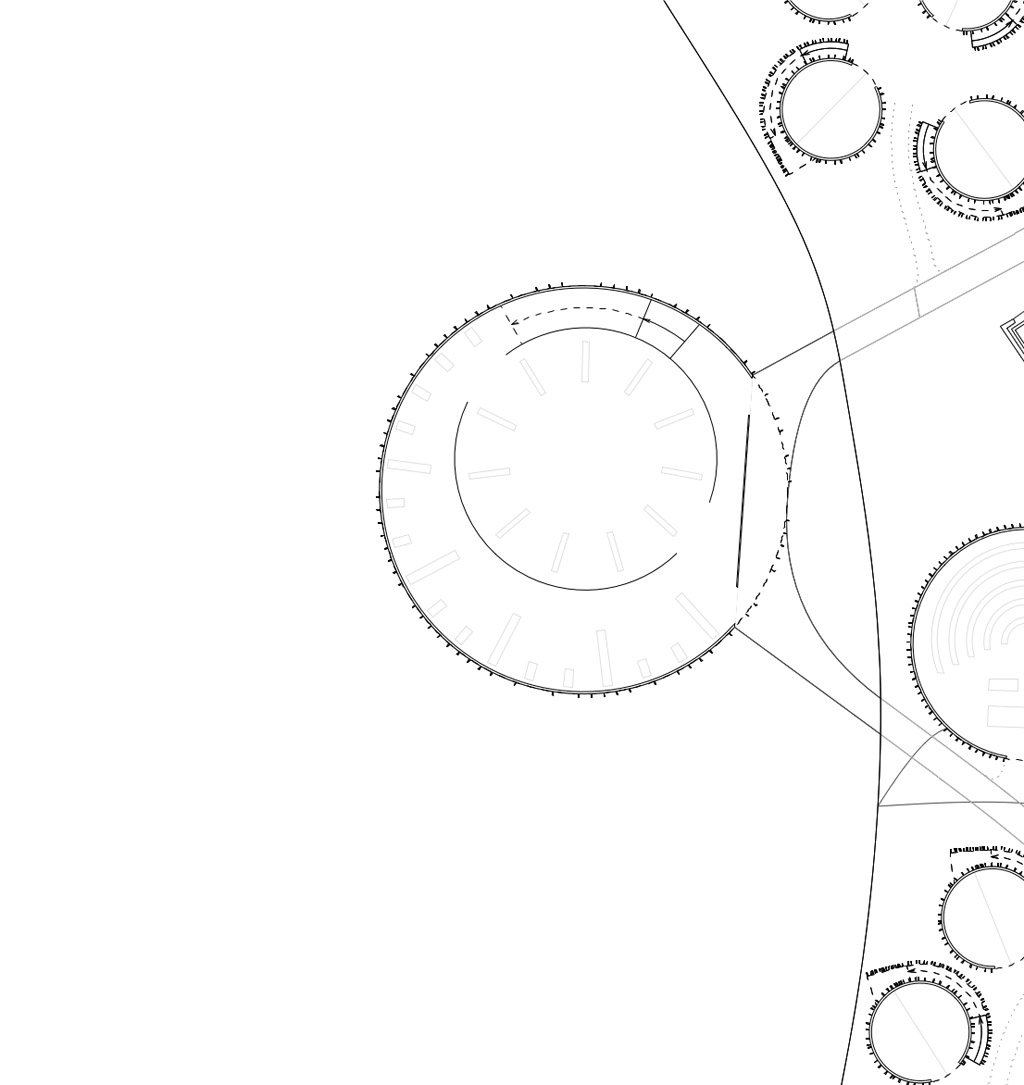 The classrooms are two-storey buildings with one classroom on each storey. They include wardrobe and toilet facilities, and are structured as flexible spaces without partitions. 1st floor and the roof is accessible from the outside from a flight of stairs. There are 10 classroom pavillions, each consisting of 2 classrooms of approx. 200 m2 (i.e. for 100 persons), evenly dispersed throughout the whole campus. 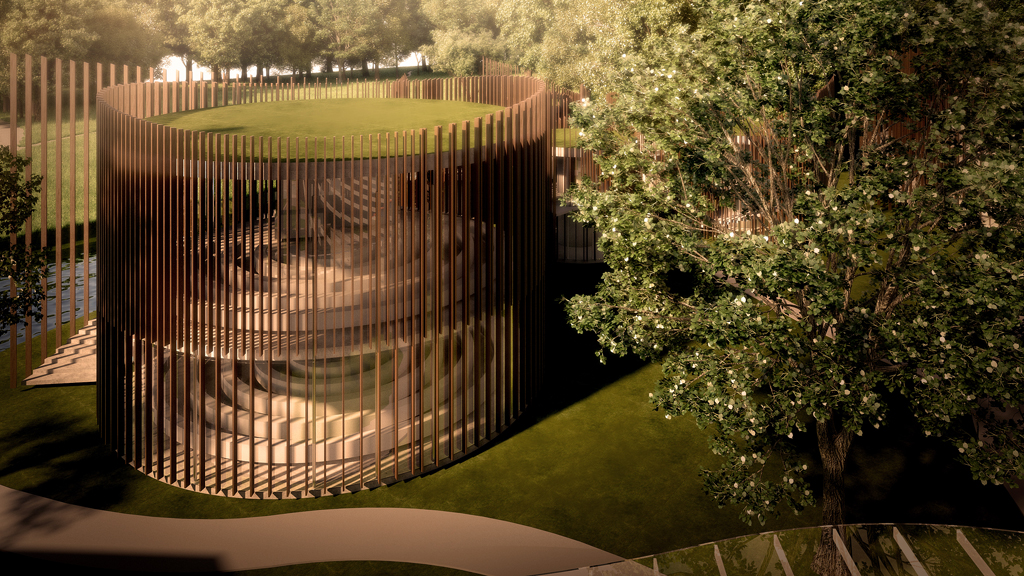 The residences (dormitories) are placed in clusters of up to 5 units, each unit consisting of 4 dorms of 15 m2, ministudios for two people of 30m2 or appartments for 4 people of 60 m2. There are 10 clusters of 5 units, thereby facilitating 200 inhabitants. There´s created an intimate student community, since each cluster facilitates for approx. 20 people only, with a central common garden and private roof terrasses. 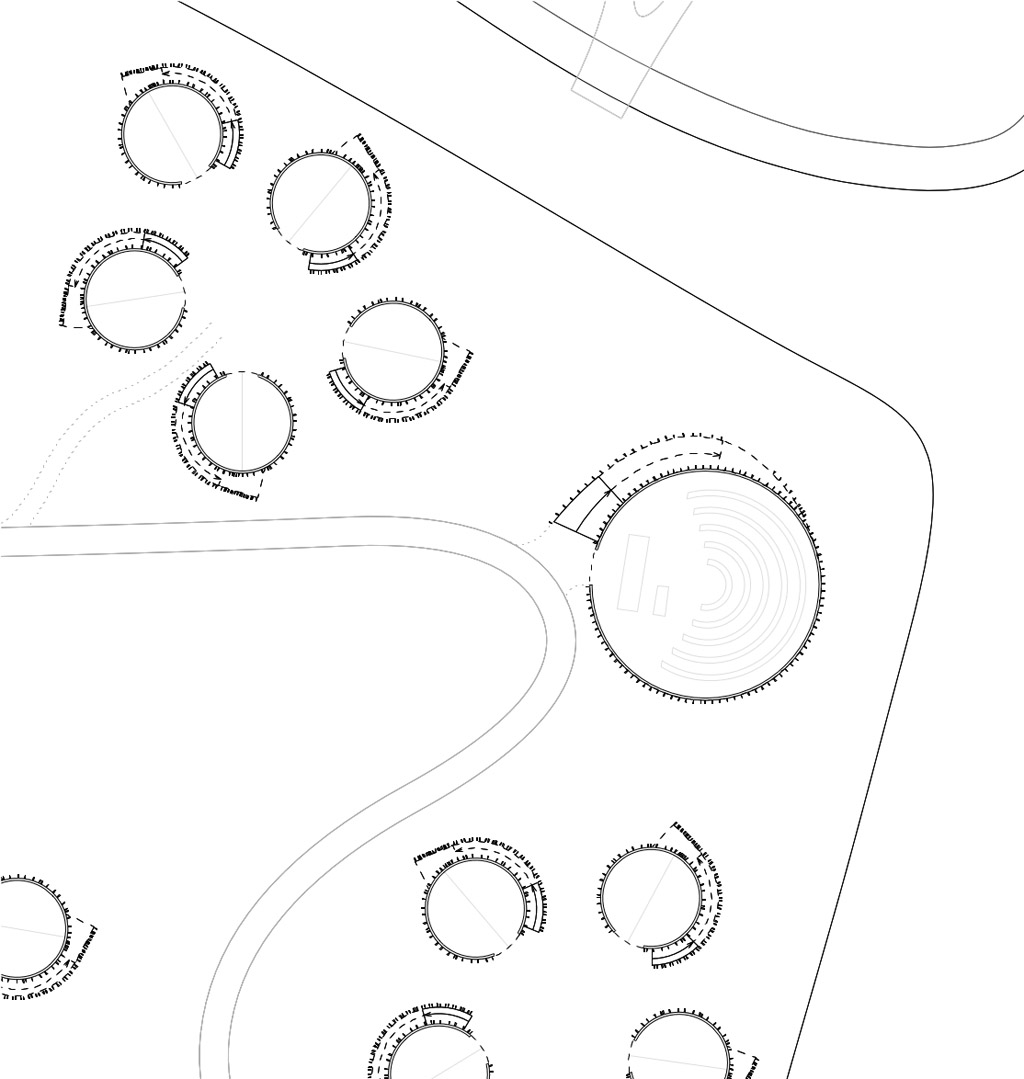 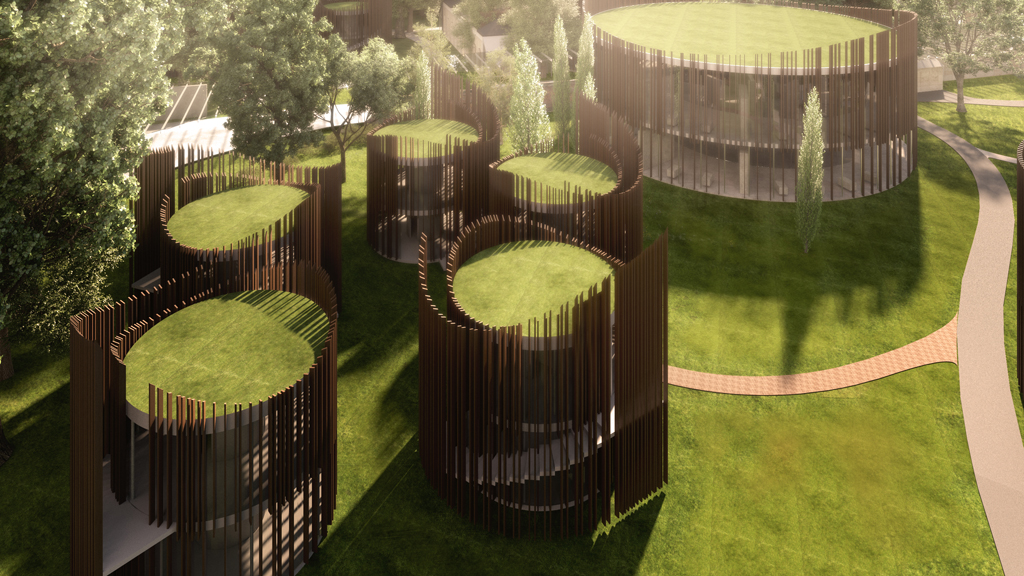