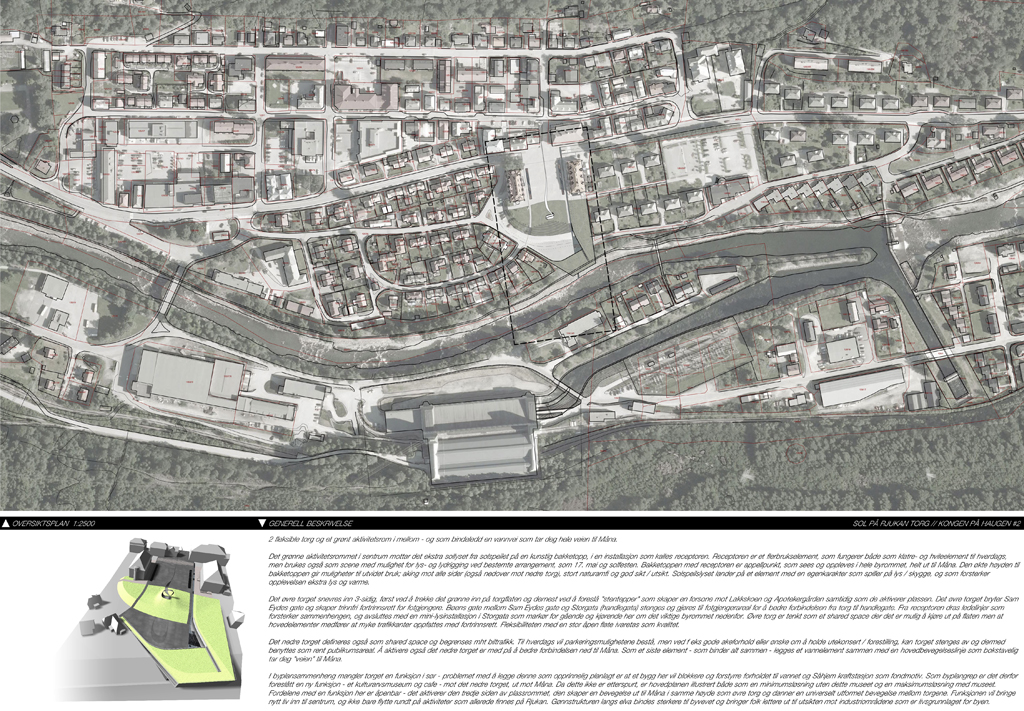 The open competition to redesign the town square of Rjukan, to welcome the new sun reflectors rays that gives the Rjukan inhabitants a glimpse of the sun during the 6 months in the shadows throughout winter, was held in march 2013. With approximately 100 participants, the competition attracted a wide range of nordic proposals. 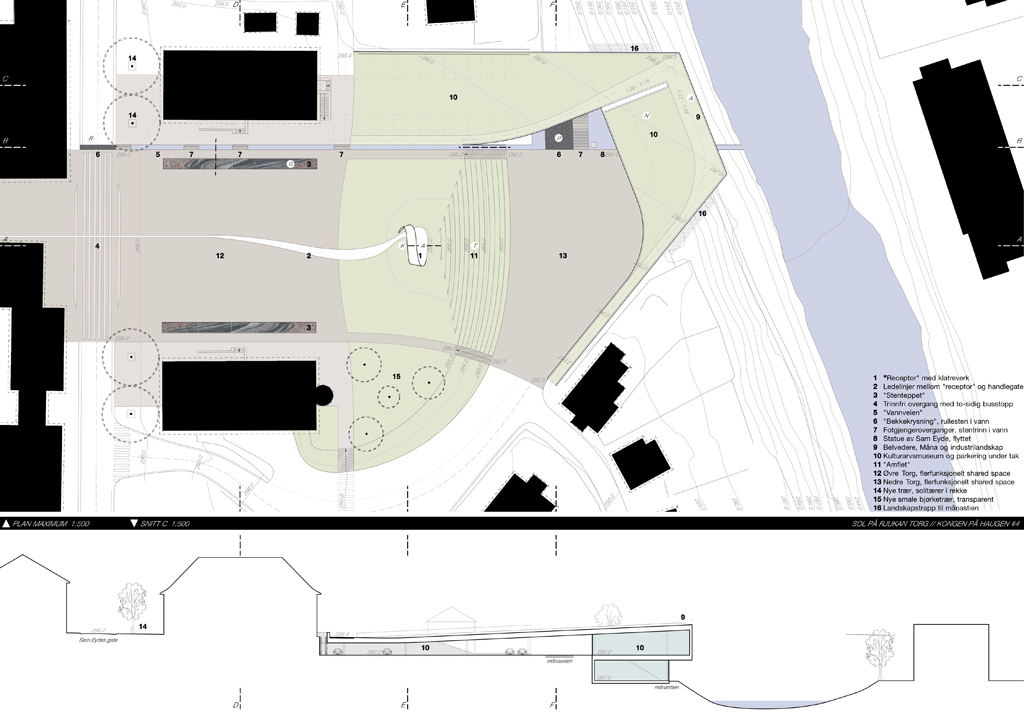 The main composition includes the transformation of the upper and lower squares, and an elaboration of the green field inbetween including the sun receptor (an activity sculpture) and down to the lower square as an amphi theatre. On the other side of the lower square, out into the river landscape, there is a new world heritage museum, thus activating the 4th side of the extended Rjukan torg. The field of green also extends out onto the roof of the museum as a belvedere in the same river landscape, and with a ramp it connects down to the lower square. The museum and ramp encloses the lower square, making a suitable stage for performances and concerts, together with a distinct entrypoint to the museum. Stretching from the upper square all the way down to the Måna river is a water passage, linking the new elements together. 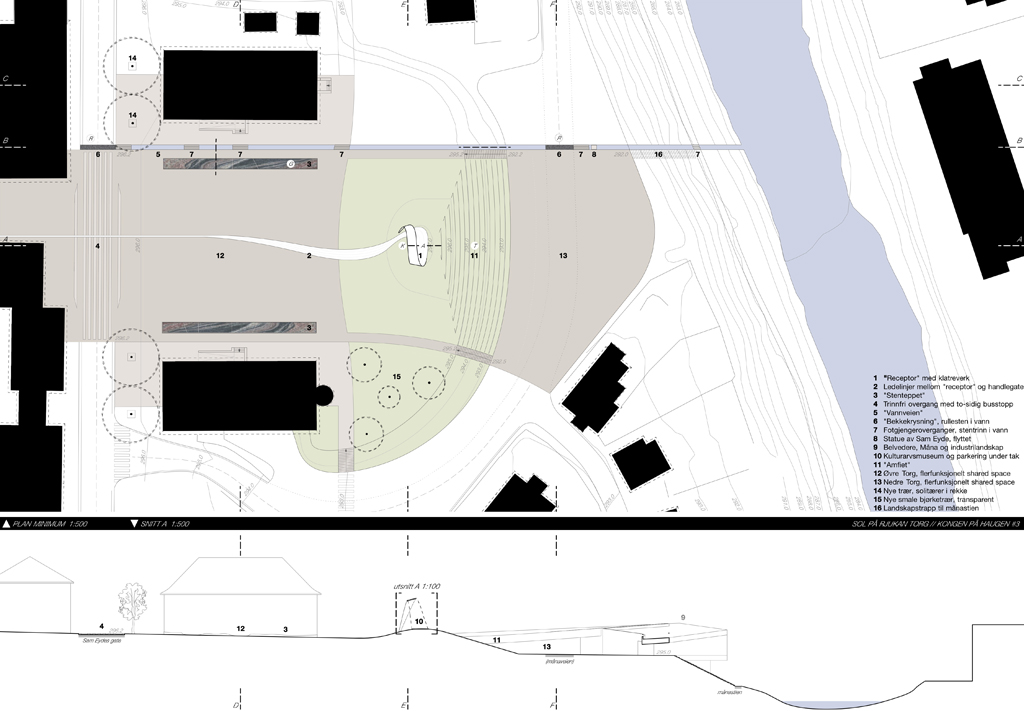 The green activity field is designed as a small hill-top, where the sun receptor is placed, giving it the most prominent position in the composition of squares. The light-and-activity sculpture is drawn away from the town square to keep the square surface a flexible space for both market days, festivals and other events. The sun receptor casts shadows, can be used both as a playground and a stage, flexible and changeable. 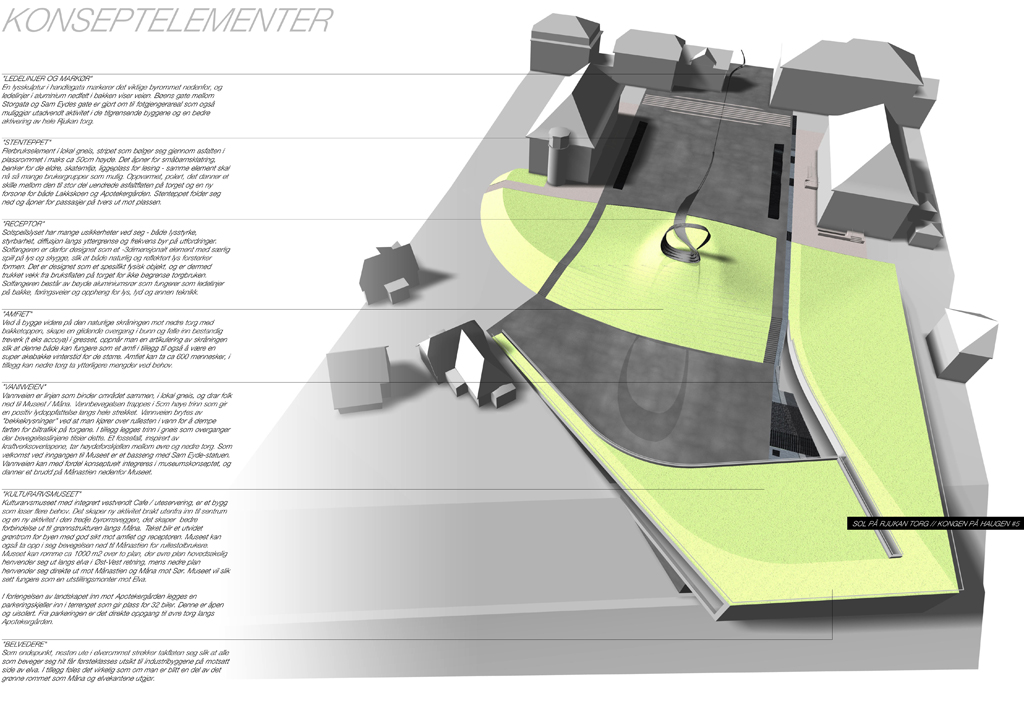 The upper square is stretched over the main road all the way up to the commerce street in Rjukan, thus creating better accessibility accross the main road passing through the square. New buss stops are located directly on the square, thus giving pedestrians priority over vehicles. To further underline the switch in priority, the water passage starts as a water crossing with cobblestones on the road, to reduce the speed of cars. The water passage runs all the way to the Måna river, including stone bridges, a small waterfall inspired by the 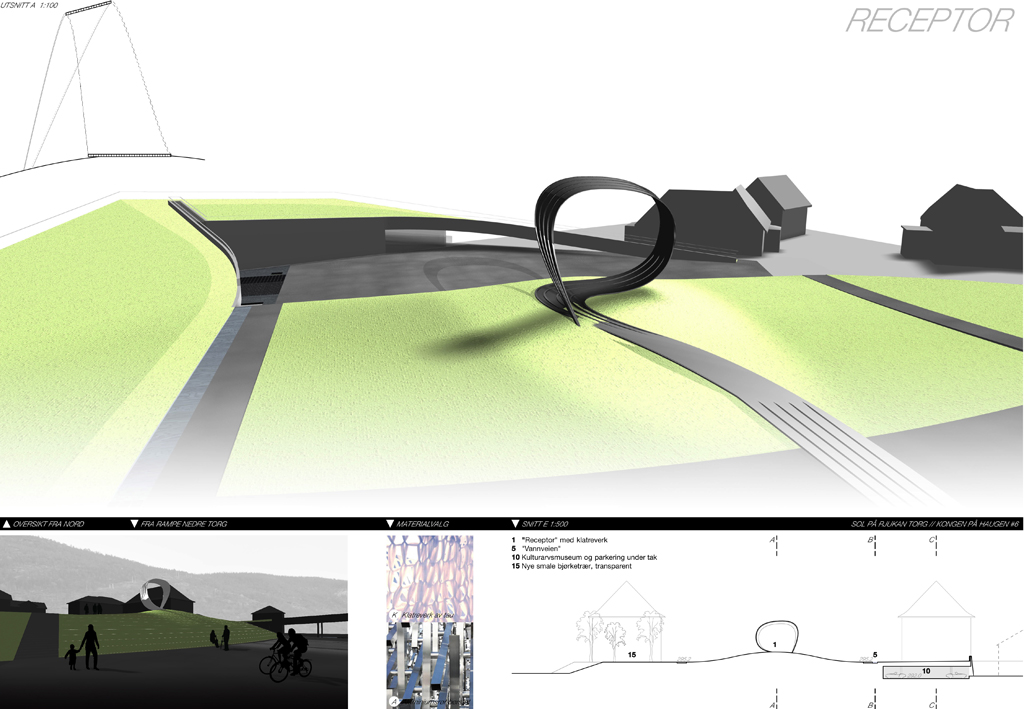 The square is left mainly untouched, except for two stone carpets separating the entrance zones of the town hall and library buildings towards the center of the square. The stone carpets are multifunctional elements; for sitting, climbing, laying down and even skating. The carpets undulates to open for passages across from the square to the buildings where this is necessary. 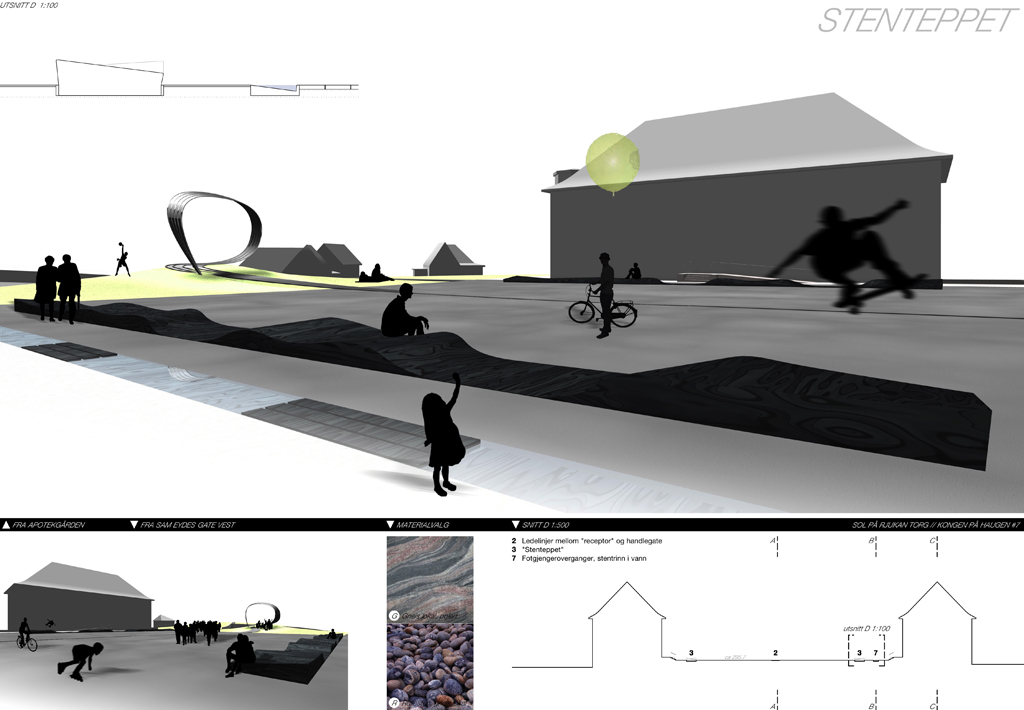 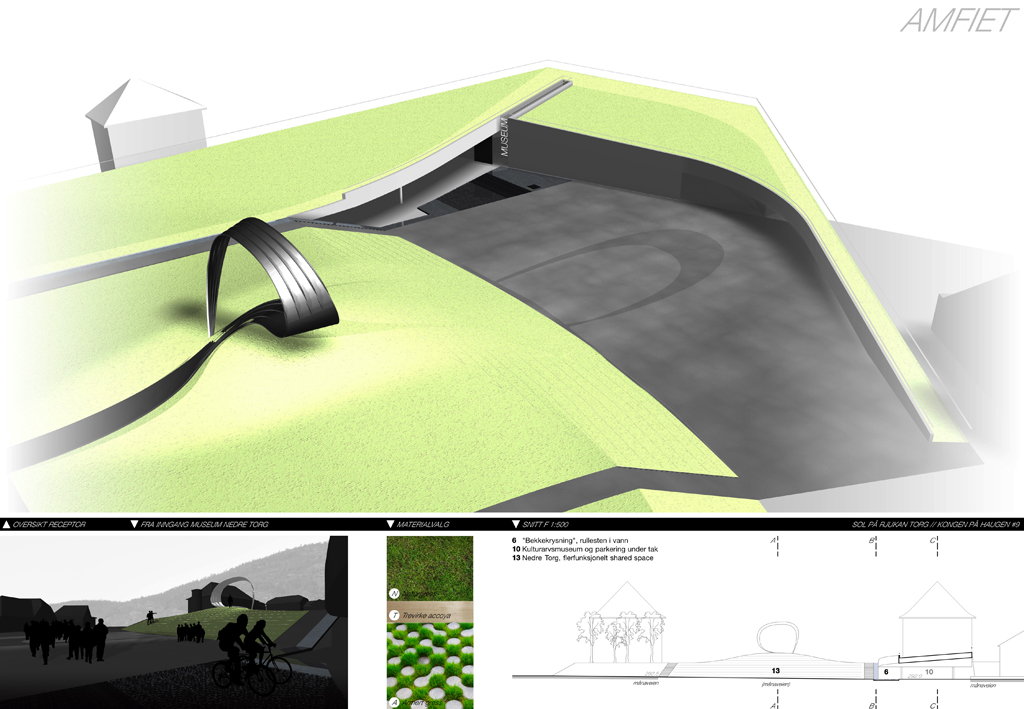 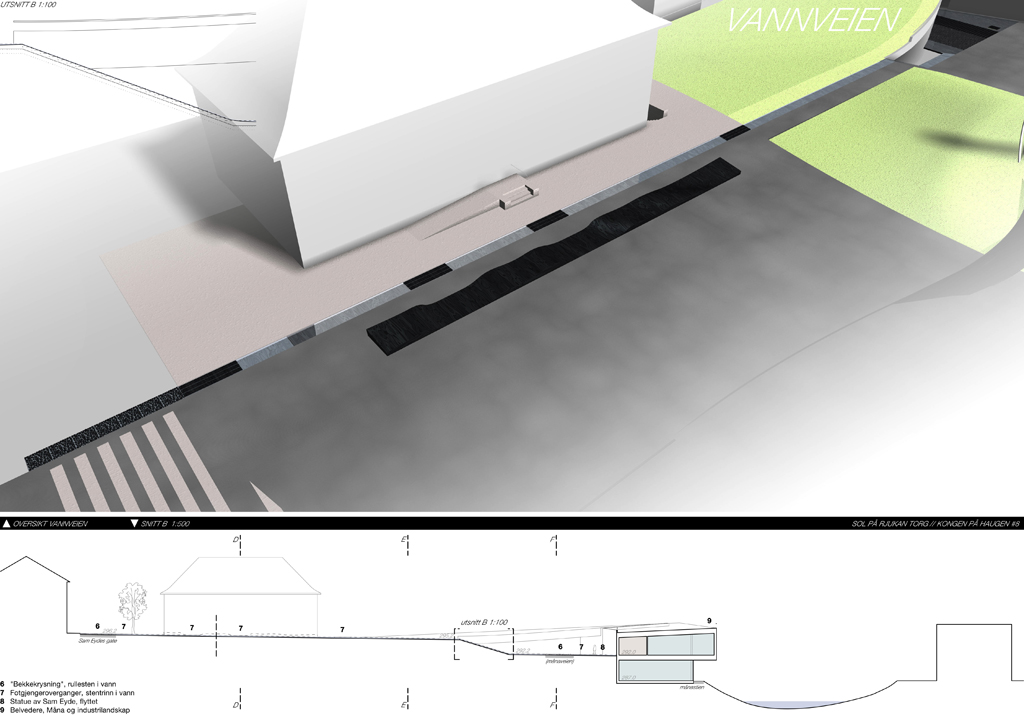 The water passage is integrated in the museum design and continues all the way across the Måna pedestrian trail down to the Måna river. The museum is divided intwo levels – an upper level with the entrance from the square, closed towards the river but opens up parallel to the river – and a lower level at the same hight as the Måna pedestrian trail, opening up towards the river. The entrance level also includes a westerly oriented café / restaurant. 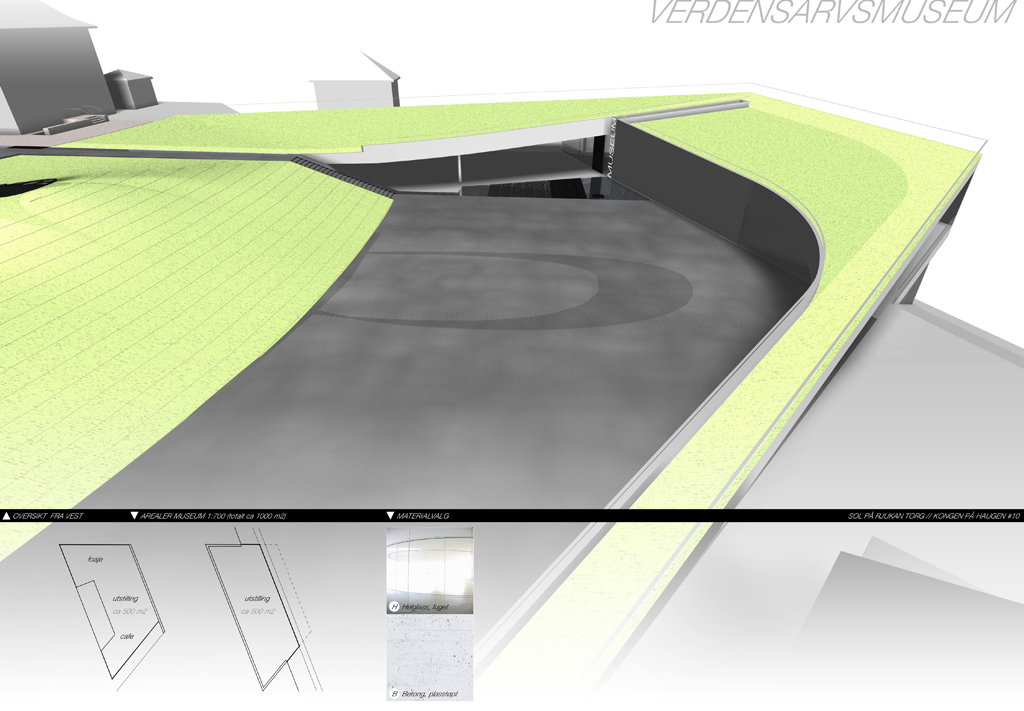