The Mosque finds its inspiration from the icelandic landscape – gently rising from the surrounding park landscape – with a protective perimeter wrapping resembling the fault line walls which have played a vital role resonating democracy and justice at Þingvellir. The Mosque visibly interacts with the park, with its green roof and the contemplative garden. Natural light is guiding your way through the Mosque and towards prayer.

The competition proposal was made in collaboration with SAAHA, and the external visualizations done by VizStudio. 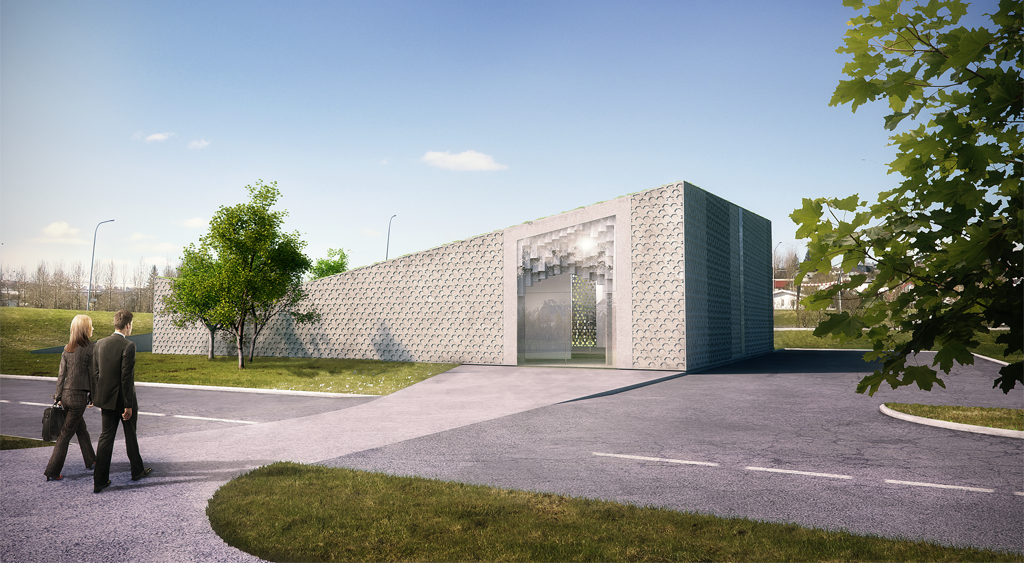 The perimeter wrapping creates a tranquil place for worship and contemplation at one of the most trafficated intersection in Reykjavik – and opens up and exposes the Mosques activities towards the outside through its variations. The homogenous wrapping is only broken to enter the building – a portal inspired by the stuðlaberg formations as well as the ancient geometric vaults of traditional Mosques. Using a traditional arabic pattern to clothe and decorate the building is inspired by the traditional icelandic patterns of the lopapeysa, also worn to protect the individual in the cold and harsh climate. 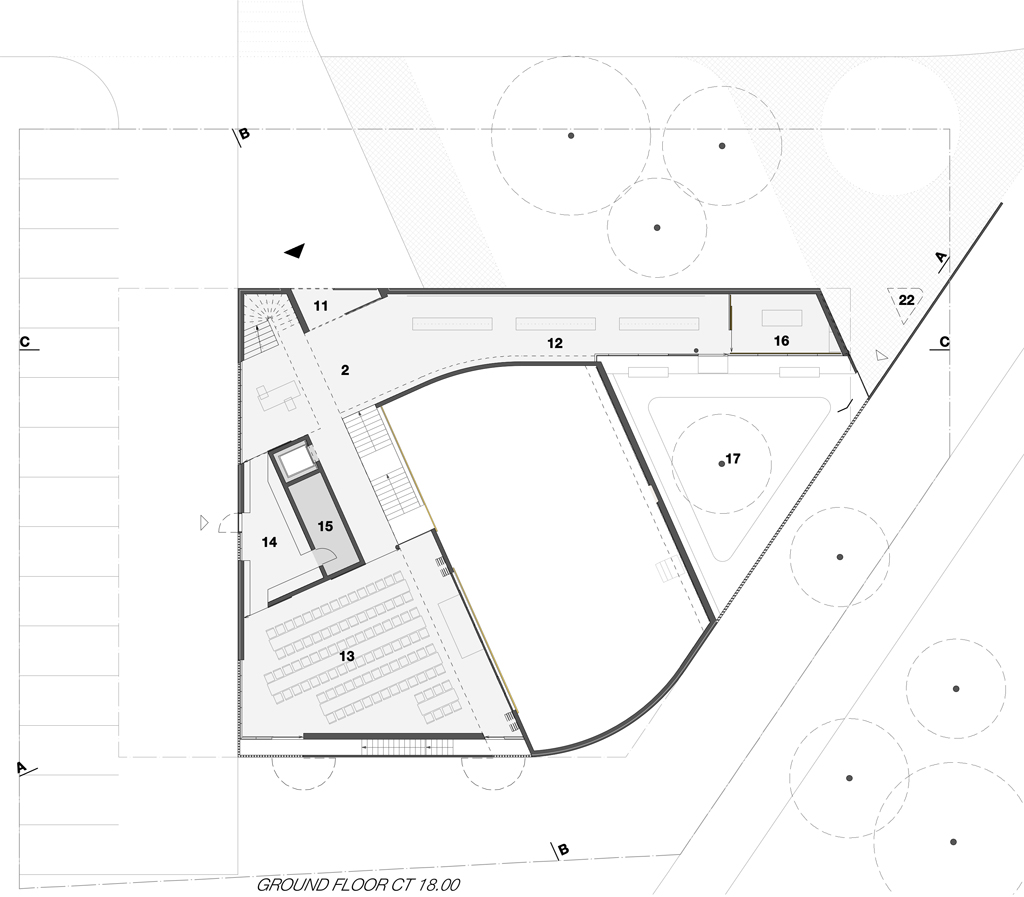 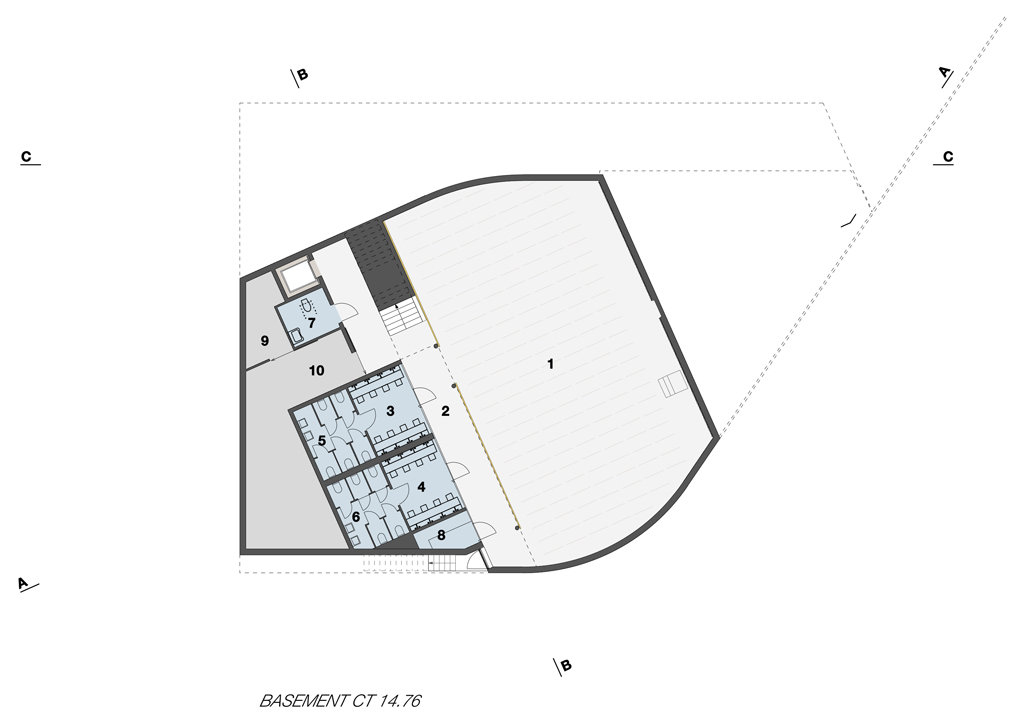 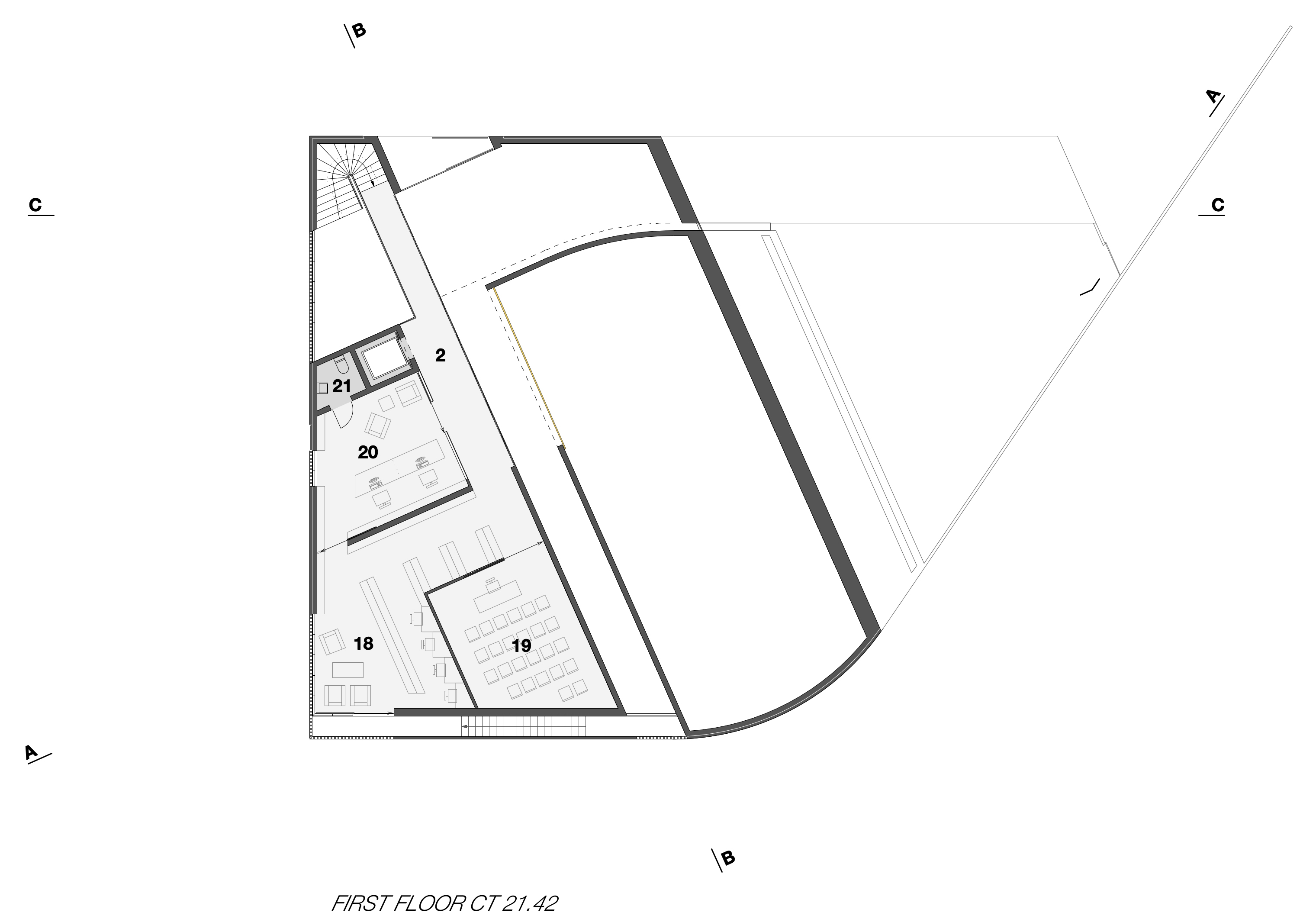 You enter the generous lobby combined with shoe and cloak storage, which connects everything within the Mosque: Down the stairs to ablution and the prayer hall, up to the office, library and classroom, and directly to the kitchen and auditorium. From the lobby you also have access to the contemplative garden and the room for ritual washing of the deceased. The prayer hall is a wide space promoting equality when facing Mecca in prayer, inspired by the traditional non-directional spaces of the polystyle Mosques. The prayer hall interacts with the common areas through its translucent metal screens and further into the ablution through translucent glass. 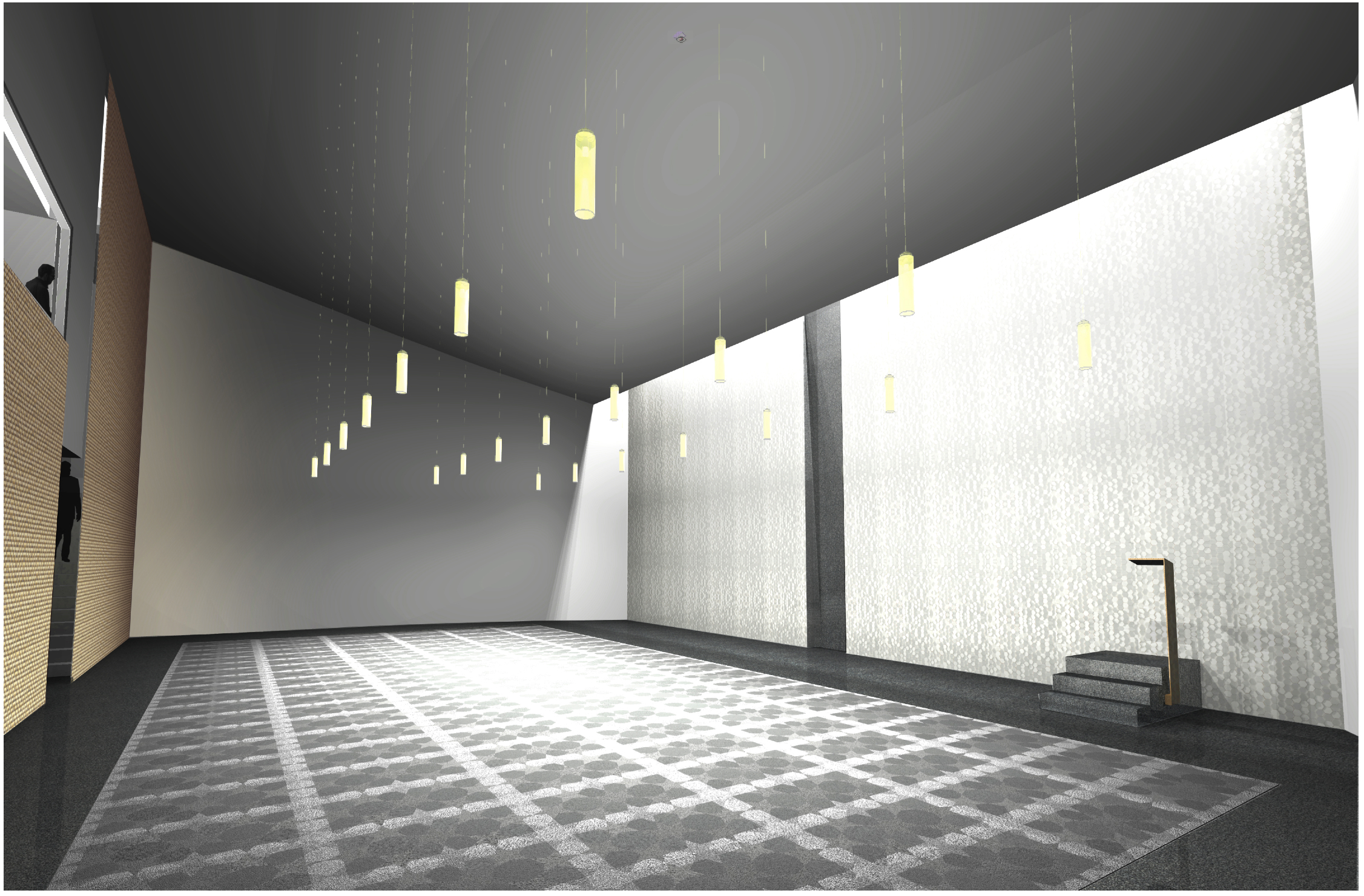 The auditorium can open up as a gallery for the prayer hall, and thus function as additional prayer space when needed. The kitchen is ideally positioned to facilitate activites both in the auditorium and the lobby, with easy access to the other floors through the elevator. The ritual washing of the deceased is given a more tranquil position towards the garden and given access to the outside through this. The office on the 1st floor has direct visibility to the entrance, and the library and classroom is an open landscape of bookshelves creating individual places in-between for discussion and in depth study. The classroom is enclosed with glass to roof above the shelves, while the hole zone can be darkened by vertical blinds. 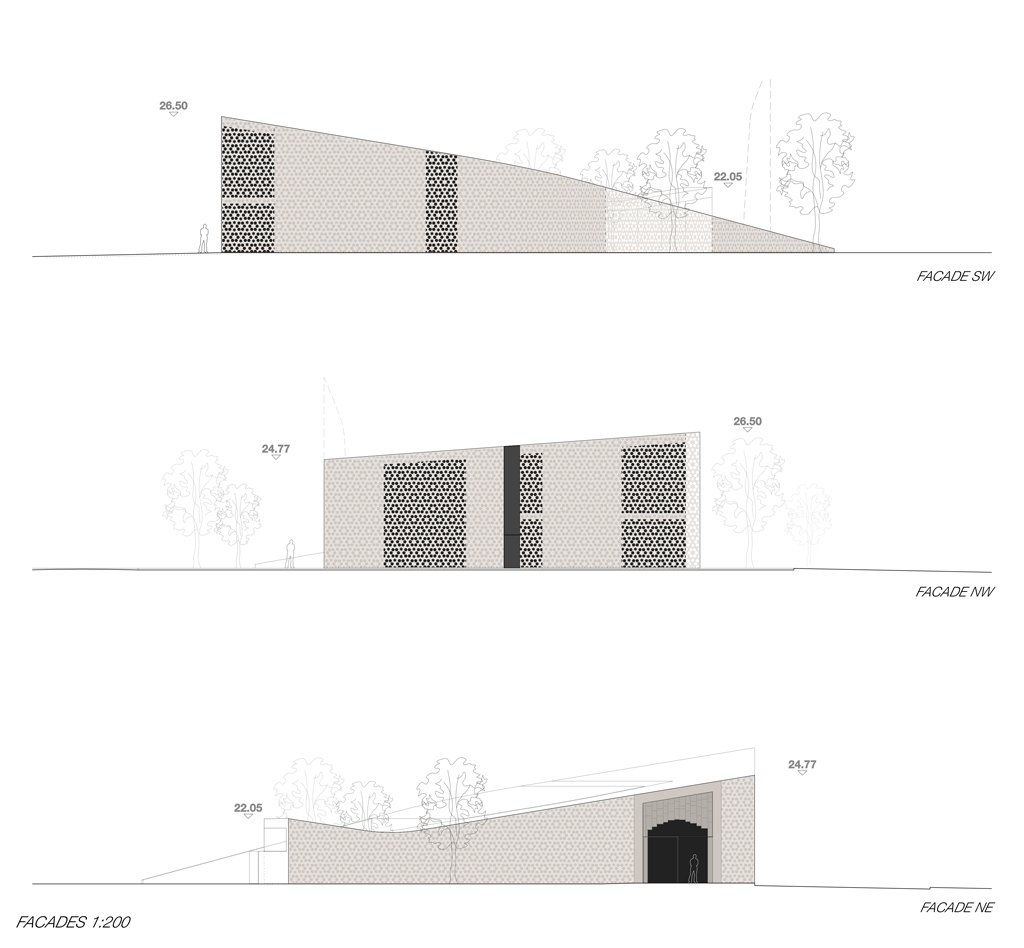 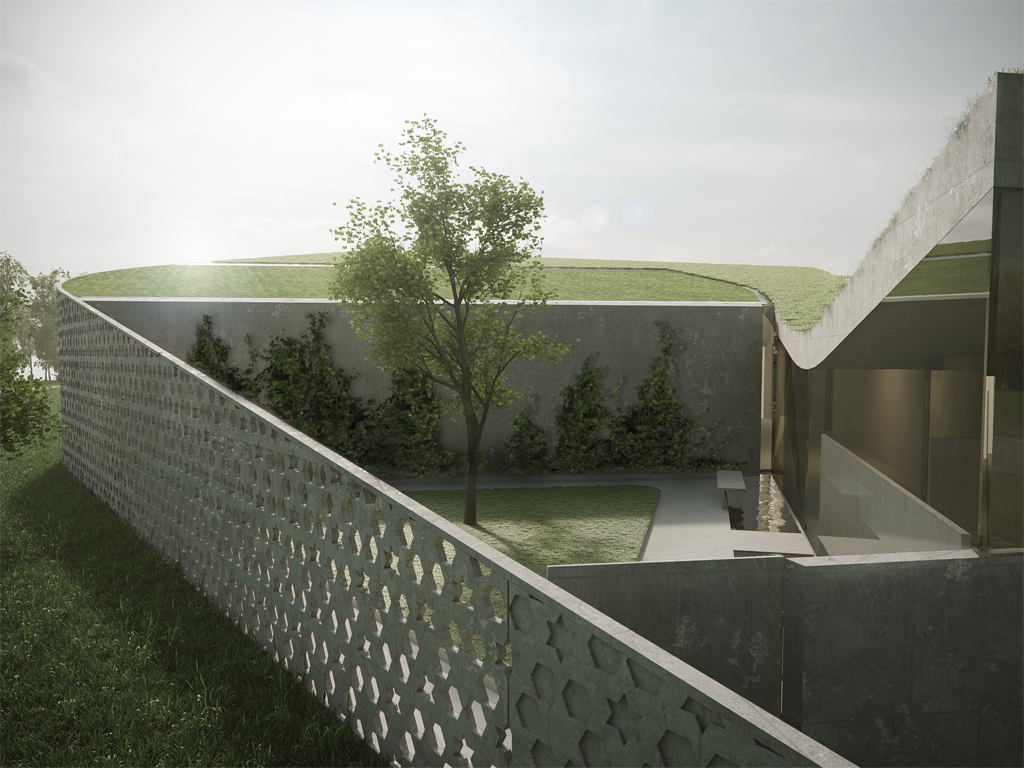 The contemplative garden contains the traditional elements of a muslim garden triggering all senses – running water, beauty through biodiversity inspired by both icelandic and foreign flora, and harvest. The material palette of the Mosque is contemporary and following the tradition of expressive concrete sacral buildings like the Hallgrimskirkja – prefabricated concrete and ultra-high performance concrete screens, structural glazing towards the garden. The quibla wall is of a honeycomb glazed tile, where shadows play in the light, the mihrab and the minbar rising from the ground in polished basalt. 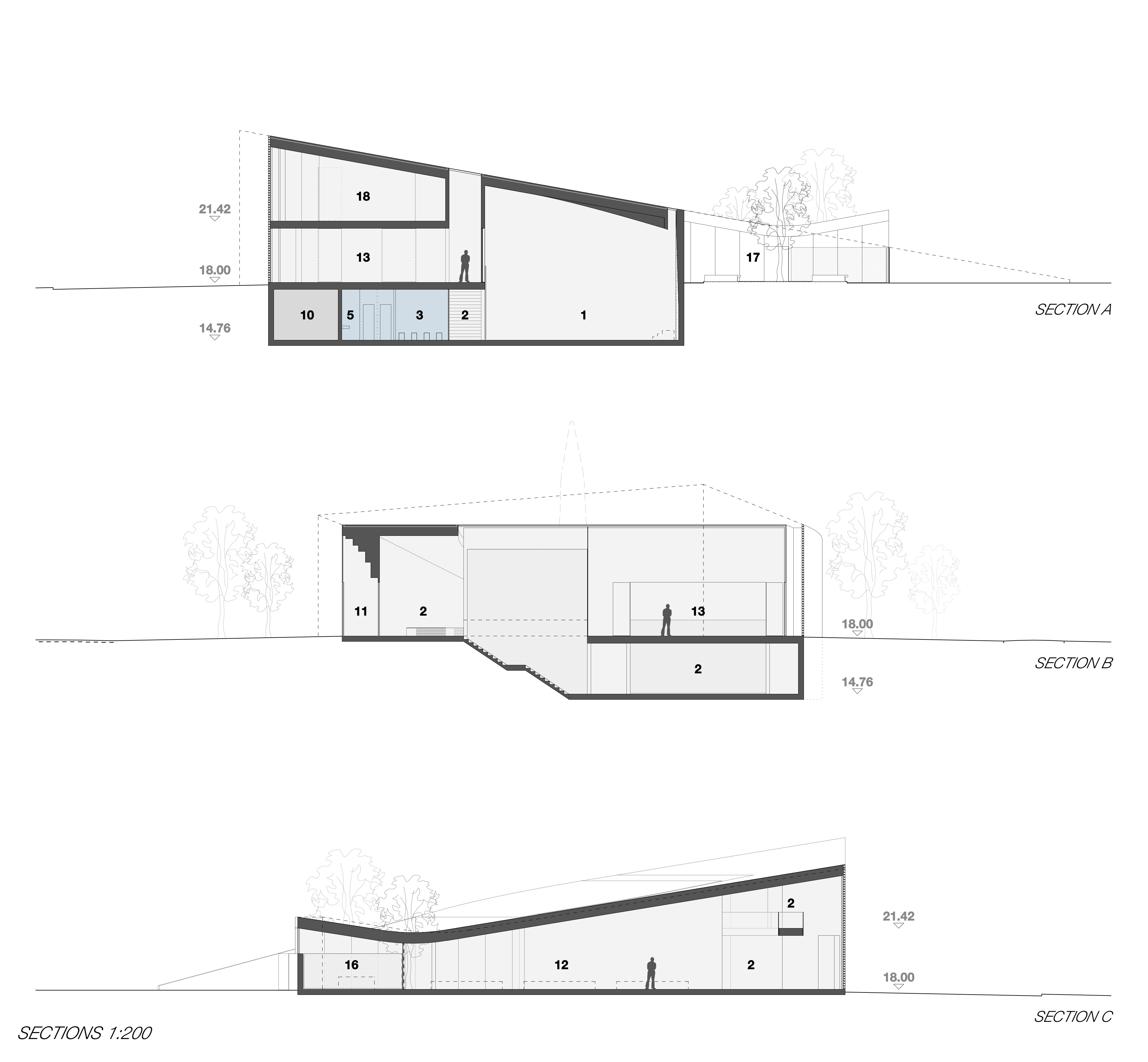 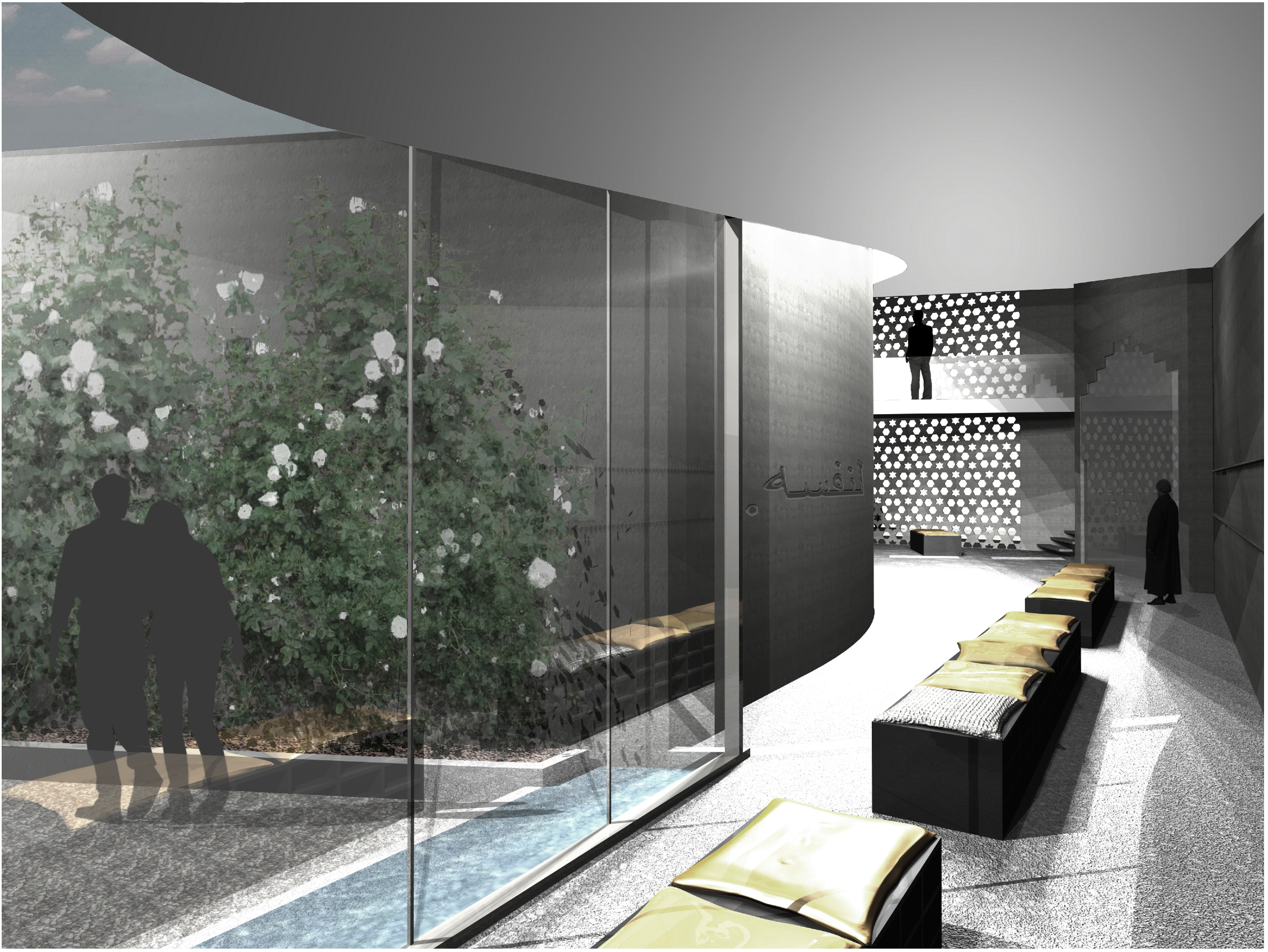